I'm amazed by the people who serve our country. They protect our freedoms and sacrifice
their own personal comforts and routines with their families to make sure ours stay safe. 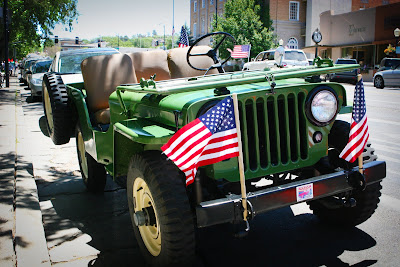 Last year, I found a blog hosted by a woman who is doing something really cool to
help to support our troops. She makes and collects homemade cards that she sends
to deployed soldiers on her own dime. Then, our service people can use these cards
to write to their families and friends in the states. Isn't that awesome?
When you take time to think it through, it's pretty amazing what these families are
committing to when they sign up to serve.
Travel. Danger. Living in different time zones. Living apart. Moving. Knowing they could
be deployed any time. Multiple deployments. Missing both major and day-to-day things
at home. Time spent apart that could easily translate into growing apart. Soldiers that
see and do things in the field that can't be forgotten when they try to return to real life.
Such things are probably just a drop in the bucket compared to the reality of what these
men and woman (and their families) sacrifice. And they're doing it for us. I think that
deserves some support. 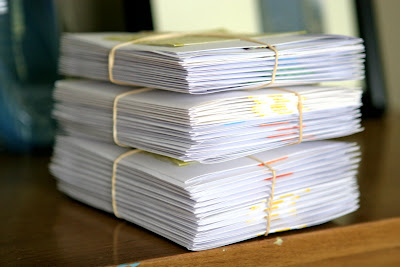 So, in a small show of support, I put together a few cards to help the Cards for Soldiers
effort last May. (See the cards I made here and here.) Then, I sent them off to New
Hampshire where she lives. She was quick to send me a thank you email, and then she
included my cards in a shipment to a base in the Middle East.
I've decided to do this again in May 2011. I'm going to keep an eye out for sales on the
products I'll need during April so I'm ready to go when May rolls around.
Would you like to join me in supporting this cause?
I thought I'd throw this out there now to give you some time to prepare and plan. Maybe
we can work together to make a big contribution in May ... or over the summer ... or
whenever you might be able to find time to contribute.
You can send five cards or 500. You can always send a donation to help with her shipping
costs -- even $5 would be super appreciated -- if you're short on time or skills.
Feeling a little interested? Check out her site for more information. There's actually
some important details on there about what size the cards should be or when you need to
include envelopes and when you don't. Also, the cards should not contain any glitter. (It
can stick to the soldiers and make them shine at night when they're trying not to be seen.)
Send all cards to:
Cards for Soldiers
5 Spicebush Circle
Litchfield, NH 03052 USA

Below is a schedule that shows what type of cards she's looking for when in 2011:

ROUND 6:
Cards should be received by June 15, 2011
General occasion cards

ROUND 7:
Cards should be received by August 1, 2011
Patriots Day, Grandparent's Day & Rosh Hashanah

ROUND 8:
Cards should be received by September 20, 2011
Halloween & Thanksgiving

ROUND 9:
Cards should be received by October 3, 2011
Veteran's Day (please write a note to a soldier in each card)

ROUND 10: Cards should be received by November 7, 2011
Christmas, Hanukkah, Kwanzaa, & New Years
Please be sure to leave a comment if you decide to participate.
I hope you'll join me in this fun effort to support our troops.
Posted by Samara Link at Sunday, March 20, 2011

Email ThisBlogThis!Share to TwitterShare to FacebookShare to Pinterest
Labels: crafts, making a difference

Hi Samara, thanks so much for the plug to my project! And for participating as well! I know the soldiers appreciate it! Pam :)

Hi Samara! I really like your blog...especially the green ideas. We are actually in northern Arizona (Holbrook) but we spend some time in the valley :)
I've participated in card drives for the troops before and this sounds like a really great program. I'm going to try and see if i can fit in some card-making in between paper writing.

What a great cause! I am going to check out her site for the details - I would love to participate.

You know I love crafting as much as you, just wish I had more time. Would you be interested in some company when you make your cards? I know I'd contribute if I had a commitment to make them with someone. Card making date in April? If our schedules don't work out - I'll do my best to contribute anyway. I loved this idea when you blogged about it previously and thought "gosh I wish I was more like Sam" ;)
XOXO, you're the best!!