People say the way you spend New Year's Day is a precursor to how you'll pass the year.
I don't know if that's true, and I kind of hope it's not since we spent New Year's Day shopping,
eating a less than healthy breakfast and lounging around. That's not exactly the way I want
to spend the year. But I do know that David running his third full marathon in January 2011
made for an awesome way to end one year and step into another. 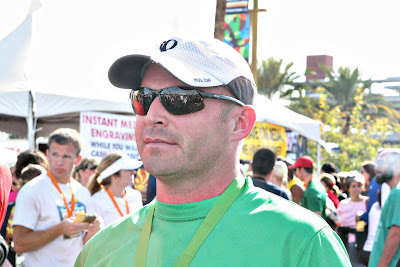 David, after completing the marathon. 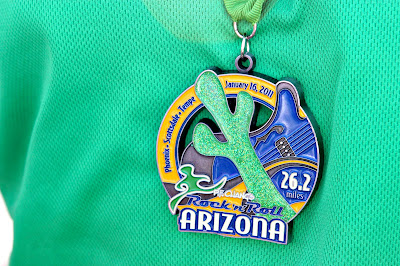 Another medal to add to his growing collection.

It's downright bad ass -- and not a little crazy -- to complete a marathon. David's extra
training paid off during the race. In 2010 he really struggled after mile 16, but this year,
he felt good for the majority of his run. The last two miles were really tough though, he said.
His legs were shot and flirting with spasm in the last mile, so he slowed to a walk at one
point. The guy behind him spoke up and said something like, 'No you don't. We're all
hurting, but we didn't run this far to walk through the finish. Let's go!' It was what he
needed to hear to give him the energy to run those last, painful steps.
His official finishing time -- three hours and 58 minutes -- meant he accomplished the
goal he wanted so badly, which was to complete a full marathon in under four hours.
He's been moving in that direction ever since his first marathon in 2008. He shaved an
impressive 18 minutes off his time in his second marathon, and then another nine minutes
this time around. It just blows my mind. I'm so proud of him. 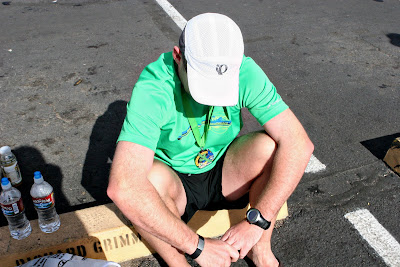 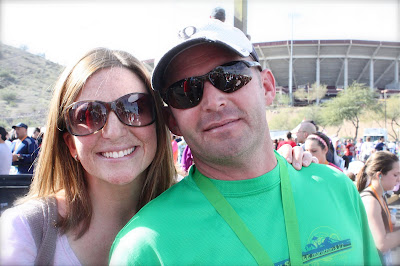 He didn't do it along though. Jason was his running partner. They ran almost the entire
race together. It was really cool to watch. (David is in green and Jason is in red.) 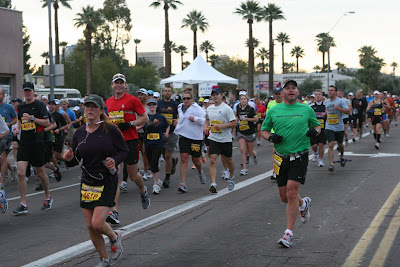 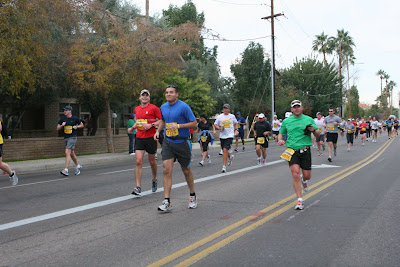 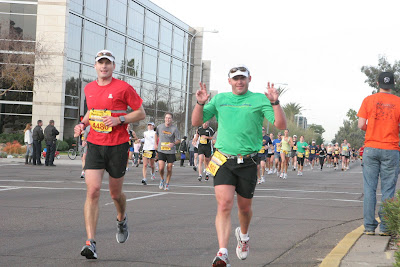 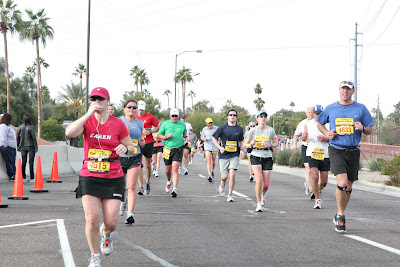 They also had the support of a band every mile, other runners on the course and a
village of volunteers. 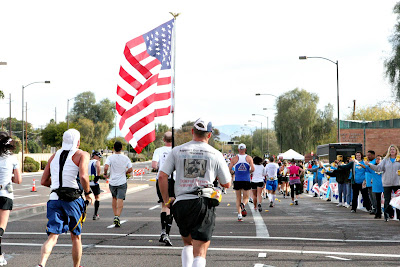 The guy pictured here carried the American flag for the whole race in support of
wounded service people. Pretty amazing. 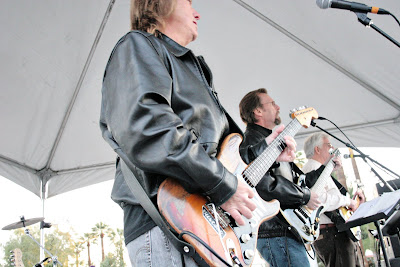 The band each mile is a fun part of the Rock 'n Roll Series. 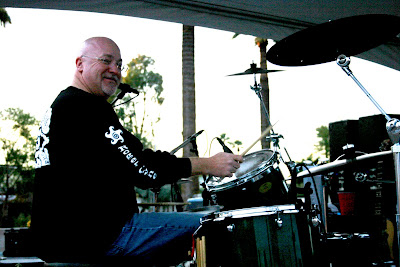 And they had us ... their official race day groupies. David's parents, Art and Mary, were
here on a visit from Michigan. You may remember that Art was in Phoenix for David's
second full marathon last year, but this was Mary's first time bounding around the city to
support our runners. She was an awesome navigator and a real trooper. Barb, Patti and
Gavin (Jason's family) also came out to cheer J & D on in the final and toughest miles. 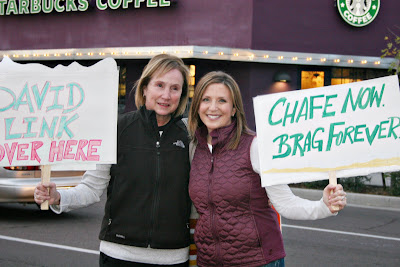 Mary and me at mile two. 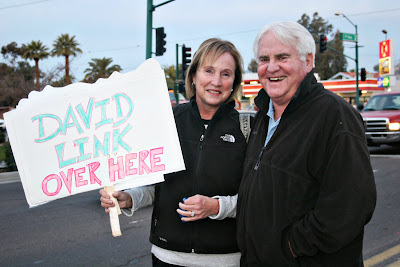 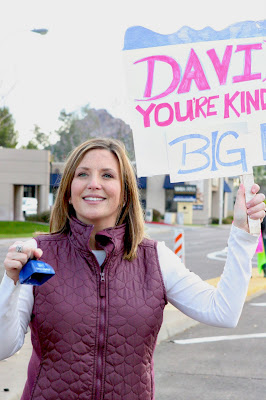 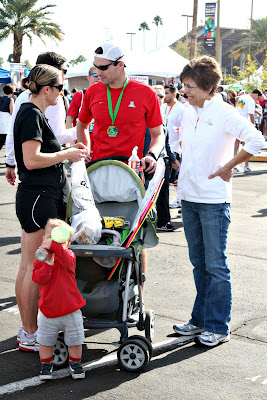 Left: Me waiting for David. I get giddy like a cheerleader on race day, and was so excited
to score a cow bell at the Expo the day before. I've been wanting one for years.
Right: Jason with Barb (in black), Patti (in white) and Gavin (in the middle of a meal). 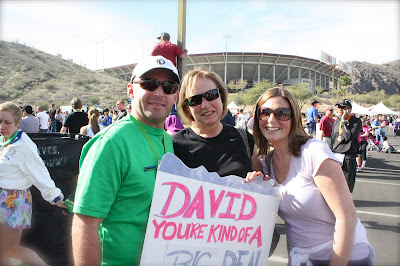 Unfortunately, none of us got to the finish line in time to see them end their journey. I
can't describe how upset I was about this. The point is that David finishes, not that I'm
there to see it. But it's such an amazing part of the event, and it was important for me to
be there to cheer him on when his body hurt everywhere and to see his moment of victory.
Plus, I think it's cool to be able to be his support team immediately following. The city was
so clogged and somewhere along the way, we got trapped inside the course. We couldn't
find a through street to save our lives. We did find each other eventually though.
The guys both muttered something like "the tank is empty" upon finishing their 26.2
mile marathon. They were totally spent and earned the right to have their bags
carried and their lunches made for them. So, with that, we headed home and refocused
our energy on big sandwiches and long naps. 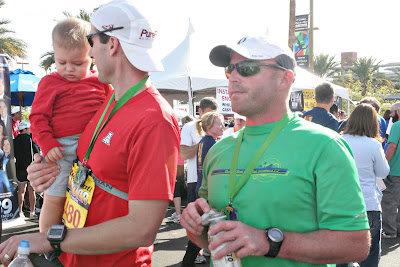 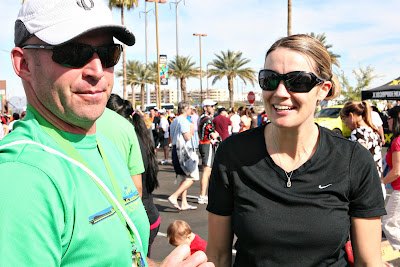 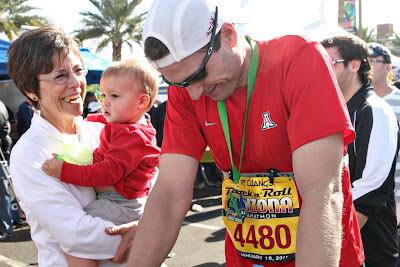 Congratulations to all the marathoners but especially to ours -- Jason and David!!
Posted by Samara Link at Monday, January 31, 2011

Email ThisBlogThis!Share to TwitterShare to FacebookShare to Pinterest
Labels: Arizona, D and me, David, David's family, run/walk, Sam, the Hendricks

amazing! congrats David!! keep up the dedication and hard work. :)

Ok, I promise to come back and read this but I have to comment on something really fast.
As I was skimming this for the pictures I saw this super hot chick and was wondering, Who's that? Then when I squinted (don't have on my glasses!) I realized, It's YOU! Of course it's you! :o) Pretty pictures (in vest holding sign and cow bell) of you! You're hair is getting long (love it!) and I love that color on you!!!
Anyways, looking good girl!
:o) Loves!

The pictures are amazing and it is just great that you share what D can do when he has his mind on it, what a discipline! Congrats to him and Jason for a job well done!

Look like a great time, that medal is really something!