{Donate Today, Save a Life Tomorrow}

I met a guy the other day who has been donating blood every 56 days for the past fifteen
years. (I wish I caught his name.) I was so impressed with his generosity, but was curious
what got him started with the habit all those years ago.
His sister died of cancer, he said. He just figured he fortunate to have good health, and it
was the least he could do for the people in his community that weren't so lucky. Inspiring! 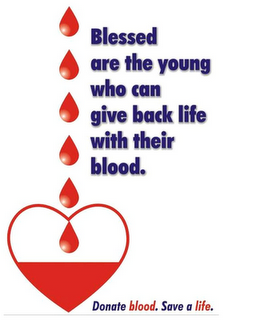 It was my goal to donate blood in April. I hadn't done it in well over a year. But it's a
small thing I can do to potentially make a big difference for someone else. My aim is to
make it a life habit -- at least a few times a year -- starting now.
I made a whole blood donation last week and was in and out in about an hour. While I
was there, I learned they really need donations of red blood cells and platelets. They give
the platelets, for example, to trauma victims and leukemia patients. Your actual time in
the chair for a platelet donation is about two hours (or one hour for red blood cells). They
take the platelets out and put the rest of your blood, along with saline solution, back into
your system. They told me you don't feel any different after donating platelets then you
do from a regular blood donation. I signed up to donate platelets on April 30th.

Facts about donating blood [source]:
* One pint of blood can save up to three lives.
* Every two seconds, someone needs a blood transfusion.
* Five million patients in the U.S. need blood every year.
* Blood cannot be manufactured; it can only come from volunteer donors.
* Platelets, critical for cancer patients, have a shelf life of only five days.
* Donors can give blood every 56 days. Platelet donors can give every seven days.
* Only seven percent of people in the U.S. have the universal donor type, O negative.
If you're interested in donating blood, visit United Blood Services or The Red Cross today
to find a location and set an appointment. 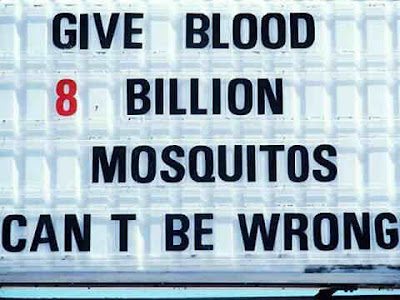 This has been a public service announcement brought to you by LinkAdventure. :)
All photos for this post were taken from Google Images.
Posted by Samara Link at Monday, April 12, 2010

Email ThisBlogThis!Share to TwitterShare to FacebookShare to Pinterest
Labels: making a difference, resolutions

This is so awesome and something that is definitely on my list. My husband has donated plasma in the past and that helps burn victims as well. Thanks for reminding me to move this up on my priority list.

I always donated blood in HS and college because they had mobile blood banks come out.... would donate a lot more if they came to me! Thanks for the reminder...
PS I am O Positive

PPS There is a VERY GOOD chance that I am going to be in PHX in June for work and I plan to take a few extra days for fun!