So, here's the verdict on composting:
It's awesome. 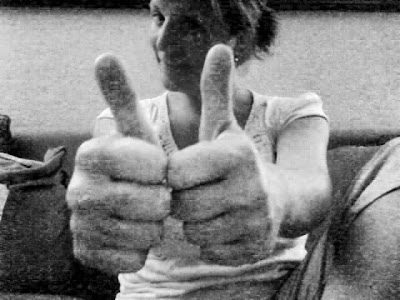 And I know it's not nice to tell people they "should" do
anything -- but you should totally do it if you aren't already. :)
I started it in April. It's become a household habit with ease.
All the things I thought might happen that I wouldn't like
have not happened at all. Such as:
- the dogs don't even notice it much less get into it.
- it doesn't smell like anything except dirt.
- it doesn't draw flies as long as we keep it mixed and add a
light layer of dirt from our yard when we add new produce.
- there isn't a mouse in site.
(That last one worried me the most. Totally unfounded
though. Notta one!)
We keep a big white bowl on the top shelf of the fridge, and
we throw fresh, natural food scraps into it as we gather them. 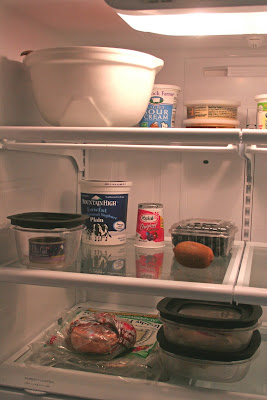 We now have one to three bowls of "garbage" a week that we
do not have to add to the already overloaded landfill system.
Not to mention the outdoor "garbage (browns) like leaves,
branches and grass that we compost instead of leaving them
at the curb on garbage day.
David is into it, too, which I think is just fabulous. He is so
good about putting things in the bowl (instead of forgetting
and dropping them into the trash). Plus, now in the past two
months that the compost in our bin has multiplied -- and
gotten heavier -- he stirs and waters it for me every week.
(So appreciated.)
The garden part of my resolutions will come later in the year.
First, it has to cool down a bit so the plants can adjust easier to
their new home. Then, I will need David to help me run the
drip system to the area where the garden will be. Finally, I'll
build out a space for it. Since all that won't happen until the
fall, the composts only home is in the bin. But...
We've actually decided to expand to the 3-bin system! 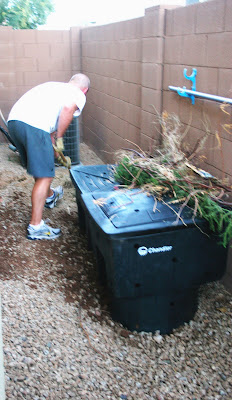 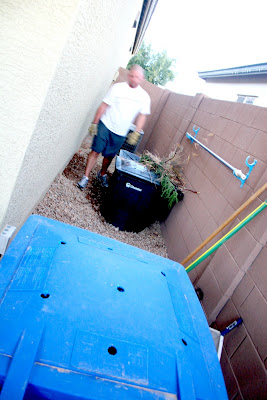 I called the City of Chandler and requested two more bins.
They delivered them the same day. (Impressive speediness.)
I mentioned this in April, but it bears repeating. The bins
were free! A lot of other cities offer the same service. So,
it's totally worth a call if you're interested in starting this
process. All you need is a small space somewhere in your
yard and the will to stir and water it 1-3 times a week.
Anyway ...
I've had them on the side of the house for the past week or two,
just hanging out until I had a chance to put them in. And then,
my darling and very thoughtful husband, went and installed
them for me last weekend. (So nice!) 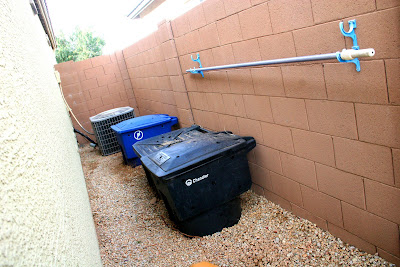 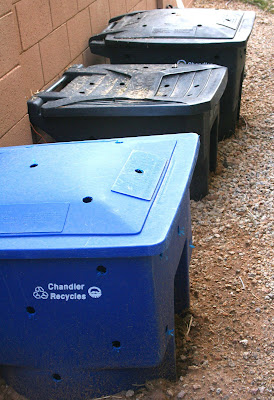 So, now we have a 3-bin system.
1 -- for drying out browns (grass, leaves, branches, etc.)
2 -- for mixing browns and greens to make compost
3 -- to let already mixed compost break down until it's
ready to use
Bon week-end!
Posted by Samara Link at Saturday, July 25, 2009

You have the cleanest fridge in the world...and so empty...apparently my family of 6 eats a bit more than the links do! ha!

We have this http://www.composters.com/compost-supplies/ceramic-compost-scrap-keeper_217_3.php to keep our scraps in . Unlike your 'fridge, there is no room in ours for a scrap bowl. It is nice because it has a filter so air can get in but it doesn't smell or attract bugs. They have different styles too. Good luck with your garden.

Wow. I'm impressed! Thumbs up to you for composting!!

DID I TELL YOU I GOT ONE OF THESE?? Now I just need to find energy to USE IT. YOU HAVE INSPIRED ME SAMARA LINK!!!

Awesomeness!! You're so green and it is wonderful!