I finally watched The Neighborhood Ball from the Obama's
Inauguration Night. I'm not sure why on earth I waited so long.
It's totally old news now, but it was amazing! (Except for the
part with Ray Romano. That could have been half as long as it
was.) I cried almost the whole way through -- each tear was
of joy, appreciation, hope, relief, respect, and happiness. 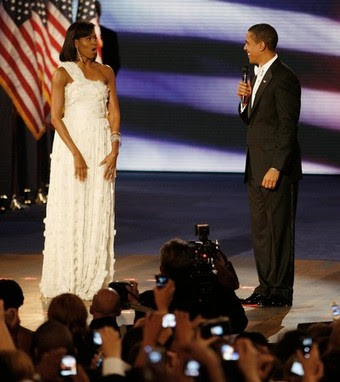 I love that he said how hot his wife was looking as soon
as he got the mic. Pretty sweet, totally unexpected.


Their dance was lovely. Beyonce sounded incredible. I mean,
to be able to sing for the new first couple on inauguration night
-- What an honor.

I'm over DVRing important
things on ABC though. They
have such a messy signal.
Sound drops out far too
often, and they get a fuzzy
jump in the picture. During
The Neighborhood Ball, it
happened like ten times.
Maybe it's the connection
at our house, but I'm not
going to rely on it anymore
for anything more than sitcoms and regular news coverage.
It's a shame because I like that channel, but whatever.
Take that ABC!

Getting back to it...

To Hope. To America. To the Obama Administration.
To a brand new day...
Posted by Samara Link at Wednesday, February 11, 2009

I don't get your title? What part id Kate Walsh play?
:o)

Don't get me wrong -- she looked amazing, but she just looked like a barbie doll. She just did a standup, holding the mic in front of the crowd between a break or to intro the next part.

I haven't seen any of this yet but will be back later when I have more time to watch! Thanks for posting :)

i cried the whole time too! i'm so insanely emotional. i actually cried through everything that day. it was so amazing. :)
p.s. i TOTALLY thought it was my connection that was messed up! i'm glad to hear i'm not going to have to call my warranty people. that was seriously on my list today! :)