{Today is a Big Day for the USA}

Have you voted yet?
I read accident rates are decidedly higher on election days
in the United States. One can assume that's because people
add rushing to the polls to an already busy day and they're
driving on unfamiliar streets. Whatever the reason, drive safely.
Buckle up and keep your eyes on the road.

Time will tell who out next president will be. 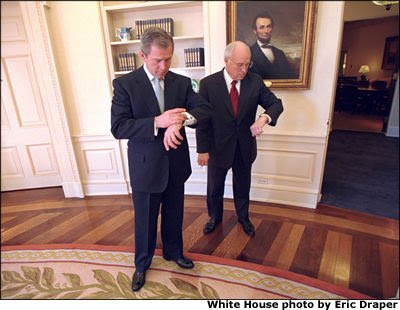 This article may give you something to think about in the
meantime. I know it struck something in me. I've been
thinking about it all week.

Editorial by William Falk, Editor-in-Chief
The Week Magazine
I'd like to go out on a limb and venture an election prediction;
Whoever gets the most votes on Nov. 4 will be deemed by the
losing side to be an illegitimate president. Not only will millions
of people insist that the wrong guy won, but that he's a fraud,
an impostor -- a willing beneficiary of a plot to steal the election.
No crystal ball, actually, is necessary to see into this embittered
future: Challenging the validity of presidential elections has
become a quadrennial American ritual. After Bill Clinton won a
three-way race in 1992 with 43 percent of the vote, Republicans
dismissed him forevermore as an ersatz commander in chief; a
majority of Americans, after all, voted against him. The debacle
in 2000, with its hanging chads and disputed recounts and
Supreme Court intervention, proved to both sides that elections
could, in fact, be stolen. Some Democrats still insist that George
W. Bush stole the 2004 election as well.

This year, Obama and McCain partisans already have their
rationales in place. If McCain loses, the Right will claim massive
election fraud involving legions of homeless felons and illegal
aliens who cast several ballots each. Of Obama loses, the Left
will discredit the results as the product of pure racism and
Republican efforts to block African-Americans from casting
ballots. Either way, it will be a pity; the beauty of our system
used to be that Americans suspended their disagreements
when the votes were cast, and grudgingly accepted the will
of the people. Elections were definitive. A new president was
allowed to lead for a year or two before the jackals descended.
We could use a new leader -- a legitimate one -- right about
now, don't you think?

I can't wait for my last class to get out so I can run home
and turn the news on. It's a big night! With any luck, we'll
know before it's time to go to sleep tonight.
Hang in there -- only one more day of campaign ads to get
through. Rock the vote!
Posted by Samara Link at Tuesday, November 04, 2008

Email ThisBlogThis!Share to TwitterShare to FacebookShare to Pinterest
Labels: politics

Interesting article. I tend to agree. I've long believe that the respect for the President and the whole process is gone. There was a time in this country when you didn't bad-mouth a President - regardless of your side. Not anymore.

I will be leaving work at 5pm to vote and then rushing home to turn on the news. :)

Absolutely. In my opinion, this last administration hasn't made it easy on us.
And then there was the whole Lowinski mess. It's one thing for mud slinging
and debating to go on pre-election, but I think it's important to respect the
process once it is complete and the voters have spoken. The Constitution
accounts for free speech so politicians can be held accountable, which is
important, but it doesn't mean respect should be thrown out the window.

Great posting Sam. Interesting to think that no matter who wins someones always going to complain. I live in a "blue state" that makes it feel as though your vote doesn't count but when it comes down to less than 600 votes as it did in 2000 you have to know that it matters.