Air conditioning:
Ahh... These kinds of repairs are so much fun, huh?
We've spent precisely $1,983.44 to get our A/C functioning,
all because the people who built our house in 2003 were kind
enough to put the entirely wrong coil in our system. It was way
smaller than the one that should have been installed. So, it held
out for awhile but there was no way it was ever going to last.
What really pisses me off? They knowingly used the wrong
f-ing coil because apparently there are a ton of this kind available.
The people at Carrier still have storage rooms filled with them. I
don't know if they were discontinued at some point or what, but
they had a surplus and didn't want to lose all the money they had
spent purchasing them. So, they just slammed them into units
whether they were right or not. Awesome. {I'm not sure it's Pulte
(the home builder) or the A/C people they subcontracted our
neighborhood out to, but we are not the only house on the block
with a bad coil.} So, our unit wasn't keeping up, but we weren't
sure why at the time. We had one place come out last spring to
take a look. They charged us $375, only for the same thing to
happen a month later. They came out again and charged us $75
to tell us to change our filters more often. ****Lazy asses****
We got referred to a friend of our neighbor. His name is Joe. He
owns his own determine the issue, but he told us it would and he
was more than fair with his pricing. Joe figured out we had a leak.
He had to take everything apart to figure out where said leak was.
Then, a coil was ordered. Six visits later and plenty of money too,
I think we're finally good to go. I'm so thankful for Joe. We would
have paid double to anyone else, and who knows if they would
have taken the kind of time and care he did. You can be sure,
Carrier & Pulte Homes have not heard the last from me!

David:
He's working hard in between Albuquerque and Phoenix these
days. It's always interesting for him to try to be in two places
at once. He was there all week last week and is on his second
trip there this week. He is still running and looking very forward
to his marathon in January and a couple smaller events between
now and then. (Including one this weekend.) He's all skinny and
hot now! Last I heard, he'd lost 16 pounds. Meow! 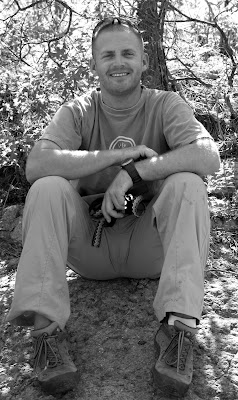 Decision:
Decision by indecision may be the path of least resistance,
but if you want to be the executor of your own life, you must
make concrete decisions. Especially the tough ones. Today,
I've made a decision, and it (finally) feels good. 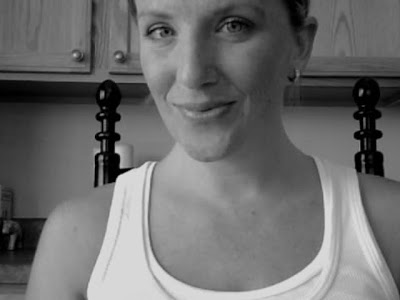 I still have some hurdles to jump in my own mind. I have
been **all over** the map lately. But at least I'm moving
in the right direction.

Earth (the only one we've got):
I've started reading 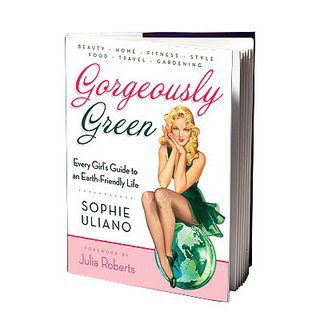 It's an absolutely interesting read. There are lots of things
included along the way to help you gauge your earth
awareness or to ask you to pause and evaluate what you've
just learned (i.e., are these dangerous products in my makeup
and bath gel?). It's all delivered in a very easy to read way that
doesn't make you feel like an idiot or that the author is some
kind of crazy. It's very palatable. The book encouraged us to take
a started quiz to see where we were in our understanding of some
basic earth friendly ideas. I learned some things! Click here to see
the answers. Good stuff! Also, the author of the book was just on
a local morning show in AZ. Click here to read a short article
where she tells us nine super easy things we can do to make a big
difference for the health of our planet.

Emails:
Do you have things you use to help indicate if you're "on top of"
your life? One of my barometers is my email inbox. My goal is
always to keep less than 50 emails in there. If it's holding more
than 50, I am behind, putting things off and have a lot of things
to reply to/save/do, etc. The other day, it was at 92. I've spent
some time in the last week working it back down. I think I have
officially replied to everything I needed to. It feels great!

Facebook:
I originally signed into facebook only to see photos of Chris
& Amy Payne. Since then, especially lately, I've had a small
handful of my friends add me to their friends list. Knowing
that I tried MySpace and wasn't a fan, is facebook worth the
time? I use my phone, blog and email to keep in touch with
people. I'm considering expanding to facebook because it
seems like everyone else is doing it. I haven't put anything
on my profile but my name. Should I just keep it that
way or is using it totally worth it?

Friends:
My friend Amy Jackson just got a new kitty. How cute is
this guy?! His name is Sammy. :) 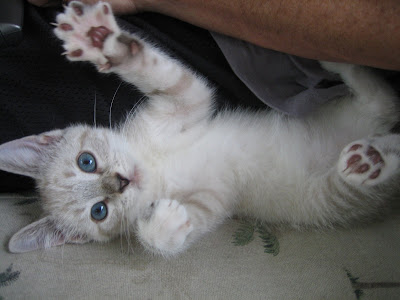 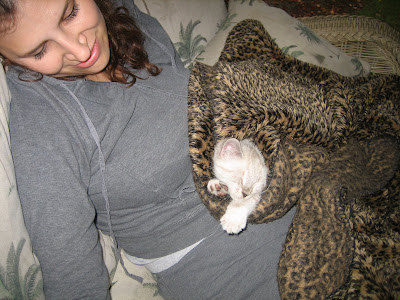 Hair:
Hair cut and highlight/lowlight day is always a good day. Yay!
I'm so happy to have a good student salon right around the
corner. SO CHEAP. You just can't beat it. I went a little blondie
yesterday. It's fun to change it up.

Health:
All is well in this department, thankfully. We're both still going
to the chiropractor. I always feel amazing right after getting an
adjustment. David said it's really helping the issues he was having.
I'm glad because I don't think tingling in the arms and numbness
in the fingers is a good thing. (Scary!) I am down to twice a week,
which makes for smaller copays, and I do appreciate that! We
both just had a physical (for our insurance). David's numbers
were great. No worries with mine, except my bad cholesterol is a
little high. I really need to eat less carbs and sugar. Someday. :)

Movies:
Haven't been to a movie since Tropic Thunder.
I think I got burnt out on bad-to-mediocre summer films for
a bit there, but I'm getting the urge to go see something.
What's out that's worth the time?
I am looking forward to Body of Lies (DiCaprio & Crowe)
and The Dutchess (Knightley). Other suggestions?

Our animals:
Since D and I are gone for a long day on Tuesday and Thursday,
we've enlisted the help of Megan, a high school senior who lives
in the next neighborhood over. She comes over to let them out
and give them some much needed attention. It's working out
great and doing much to assuage my guilt. She is fabulous and
worth every penny. (Thanks, Megan!!)

Photo:
I've been meaning to share this for some time now. My friend,
Jennifer Jones, who recently made her way to Europe, took this
at Notre Dame, and I thought it was lovely... 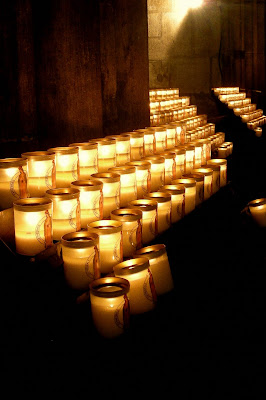 School:
School is going good. I have classes Monday through Thursday.
Most of Monday and Wednesday is available for studying
though (or not, if something fun comes up!). My favorite class
is videography, by far. So fun! Very hands on. I know I'll learn
a lot in there. I'm kind of fumbling through French. It's hard!
I just have to study and practice a lot (more than I'd like to).
Splitting my time between the downtown Phoenix and Tempe
campuses is working out much better then I anticipated. Once
I got in the swing of it, it was no problem at all. The facilities
downtown are so nice. I'm not doing an internship this semester.
So, it's just school. I got a slow start on the semester, but I'm
getting caught up and feeling much better about it now.

TV:
Entourage is back on, and Grey's Anatomy premiers on tonight! 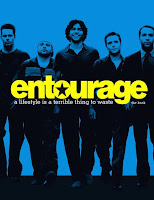 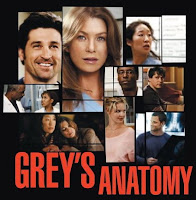 I'm dabbling in The New Adventures of Old Christine and
Samantha Who?, but I'm not sure how into those I am just
yet. Otherwise... I hope you can take three minutes to watch
this Letterman rant. Bill Clinton was on Larry King Live
Wednesday (DVRed it), and Presidential debates officially
begin on Friday. I'll be tuned in! (If you're in the area and an
Obama supporter, you're welcome to join me for them. I'm
in need of a local friend who gets it!) 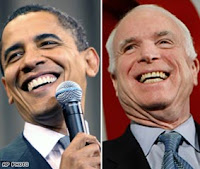 Have any of you been watching the John Adams mini
series? It got a lot of mention and something like 26
nominations at the Emmy's. And so did Damages, which
I hadn't even heard of. Just curious if they're worth renting.
So, if you're in the know...

And that's the update for today!
I hope you're all well.
Posted by Samara Link at Thursday, September 25, 2008

Glad to hear that school is going well :)
I hate MySpace but love Facebook....I think you should keep it! I post most of my photos there so that I can tag my friends.

Dang girl, that's a hell of an update!

I have myspace and Facebook, but lately I find myself liking Facebook a bit more. It's funny, because I hated it at first, but it grew on me. I think that it helps that I'm not just adding EVERYONE like I did with myspace. I'm being more selective.

I think I may have to pick up that book - looks interesting.

WHEW!!!!
I can't wait to talk with you...I can't even begin to respond to this post. Any time this weekend...Matt is going to be out of town at a bachelor party. I have some things to share as well! Luv ya. And Facebook is growing on me a bit as well ;-).

WOW! Its great to get all caught up on ya SAM! Lets see some pictures of your hair? And Ive watched the john adams mini series. LOVED THEM!

DAMN! You are a busy girl!!
I have so much to say, but my fingers fail me...we will catch up SOON!

New Adventures... is AWESOME! So funny! On the other hand Samantha Who? is a waste of time! I tired watching it last year. Not into it. However, The Monday night line up on what ever channel plays Christine is super funny! Big Bang, HIMYM, and yes even Two 1/2 Men. It's very sexist but it's still funny. (I call it my dumb-night TV.) Takes no brains to watch any of these. Great! Don't watch Worst Week. It's super horrible!

John Adams is a must see! NetFlix it! Make sure you can turn up the volume. I had a hard time hearing them at times. Might be nice to get subtitles on too.