And we're back!
I'm finally getting caught up on blogging thanks
to my monster post on the month of September.
Hopefully it wasn't too painful to make your way
through since it was mostly photos.

The last thing I mentioned in said monster post
was that David, Killian and I left from Michigan
on October 2nd to go on our 30 hour plus drive
back to the southwest. I love road trips!!

Of course, we had our usual packing-our-car-
to-the-max, we-have-too-much-stuff-and-not
-enough-space, plus we're-in-transition-AGAIN,
and one-of-us-is-a-thinker-and-one-of-us-is-a-
feeler argument while getting loaded up. Thankfully
though, it was all smiles once we were on the road.

We drove a different route this time that took me
into three new states and David into two new ones
-- Michigan, Indiana, Illinois, Iowa, Nebraska,
Colorado, and then through New Mexico and into
Arizona. The timing actually worked out to be about
the same as the seemingly more direct, diagonal route
we took in February from Arizona to Michigan.

I tried to get us to swing into Cheyenne, Wyoming and
around through Utah instead of going through New
Mexico, but my driving partner vetoed that in a hurry.
No matter though; we still had a great time. Plus, going
through New Mexico allowed us to stop and see David's
friends at the Albuquerque PCI office. Mike McGee even
took us out to breakfast, which was really nice.

While inroute, we picked up something crazy like 40
degrees! That's weird to watch on the car thermometer.
Other than that, nothing too notable.... I didn't take many
pictures at all. Sad to say. Although, I'd like to share a
couple. Just seems like I need to document such a long drive!

The following two were taken in Colorado
while we were moving on the highway.
Traffic slowed us down long enough for me
to snap a quick look at the scenery. The
mountains were absolutely beautiful. And Marya, I
thought you'd like to see the fall colors. : ) 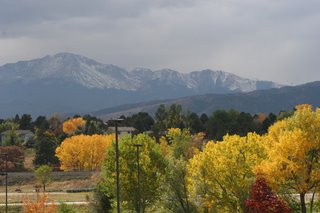 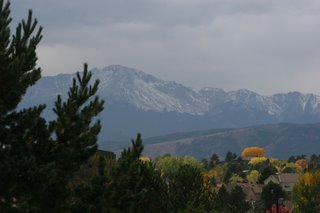 And these were my driving partners... 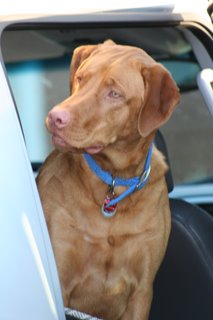 Killian watching daddy pump gas.
Isn't he just the CUTEST?!
SO glad to be bringing him HOME! 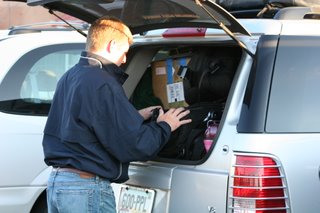 David repacking the back of our very full
Mountaineer after an overnight stay in Santa Fe.

p.s. I was posting my photos in large size.
So, they were bumping right up to the margin,
and I was beginning to think it was making it
look too cluttered. I posted these in medium
size, which is what I was using when I first
started the blog. What do you think? Do you
like large or medium better?
Posted by Samara Link at Monday, November 13, 2006

Email ThisBlogThis!Share to TwitterShare to FacebookShare to Pinterest
Labels: D and me, Killian, Link Adventures