{This One is in the Can}

One of the great pleasures of growing up in the midwest: fresh produce stands in the
summer. Corn on the cob; baskets of cherries; big, ripe watermelons; brown bags full
of green beans. Farmers set them up road side next to a drop box where you leave cash
for whatever you're buying -- on the honor system. You gently place your finds in the
back seat of your car and take them home for that night's dinner. It's the best.
Here in Phoenix, we have farmer's markets. They're not the same as the 'ole corn stand
from home, but they're good (even if they're usually stocked more heavily with crafts
than produce). And there's always Sprouts, Whole Foods and Bountiful Baskets -- for
which I am ever grateful.
Still, no matter how dedicated you are about tracking down the fresh stuff, sometimes
convenience begs for a can of pre-cleaned, pre-cut, pre-softened tomatoes. I always have
a few cans of diced tomatoes and beans in my pantry, and I'm not afraid to use them.
But ...
Did you know there's BPA in a lot of our food packaging? Including things like the canned
tomatoes you find at the grocery store? Sometimes I wonder if it's even possible to get
away from all the chemicals and preservatives out there. I mean, there's even VOC's in
our mattresses and carpet. It's ridiculous. On the other hand, it's part of business trying
to meet the demands of a culture that wants it all "now", for as few pennies as possible.
So, we're all partially responsible, I guess.
I won't ever be able to avoid all the junk out there. I'm going to eat some produce that's
been treated with pesticides and even my organic, "free range" eggs aren't coming from
chickens who roam a peaceful farm like the one Leo Bunker owned when I was a kid.
I've accepted that with indignant annoyance.
Yet, I love that there are some things I can do to protect myself and my family from our
chemical nation. One such way is to can my own foods when things are fresh and in season.
That way, I know there's no BPA included. It's something I've always wanted to do, but
never did, until this month. I made it my goal for March to learn about canning, buy the
proper supplies and to take a stab at it. 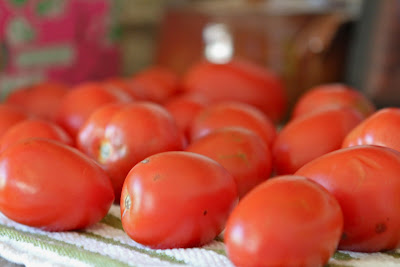 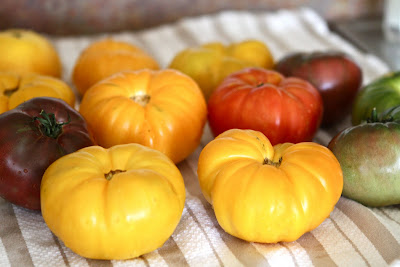 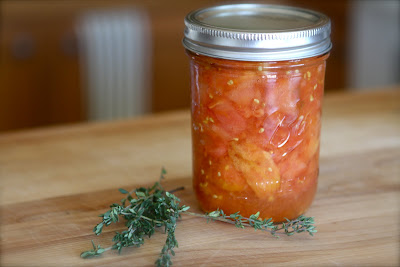 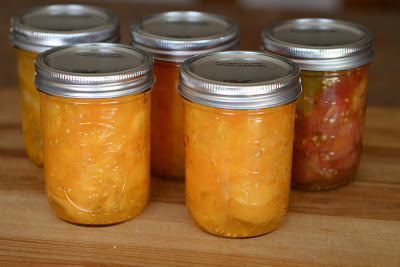 I'm so excited that I've started canning. It makes me seriously happy. I began with
tomatoes. I got five cans of diced Roma's and six cans of the most beautiful heirlooms
in my first attempt.
I'm waiting for May and June to do it again, when more things that I want to can are in
season. With any luck, I'll have a pantry full of locally grown and personally canned
produce to get us "through the winter" without having to use too much that's out of
season or commercially canned. Go, green!
Posted by Samara Link at Friday, April 29, 2011

Isn't it just so cool? I think I want to try salsa next.

Good for you!! That's great that you're canning your own produce. My mother-in-law in an avid canner. I think I'll watch her this summer so I can learn how to do it myself.