It's one thing to learn a new skill, like sewing, and make something using that skill with
the help of a pro. It's another thing altogether to do it on your own.
After my sewing lesson with Sara, I knew I better put my new found knowledge to work
before it slipped out of my brain and vaporized entirely. So, I made another pillow a couple
Sundays ago. I was actually nervous as I got started. I wanted to be able to do it so badly
and feared I wouldn't thread the machine right or remember all the steps correctly. I spent
a ridiculous amount of time on it and made a few rookie mistakes. I learned from it though
and gained a lot of confidence. I really think I'm starting to get the hang of this sewing thing
-- on a 101 level, at least.
I present to you my first solo sewing project: a simple envelope throw pillow. 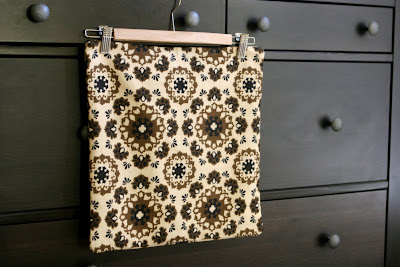 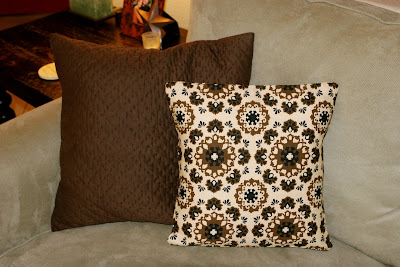 Email ThisBlogThis!Share to TwitterShare to FacebookShare to Pinterest
Labels: crafts

Which pro have you been sewing with? LOL! I want to teach you how to do the fringe still. OH! And I picked you up a little something. Nothing big, just something. Let me know when you're available.

You did a great job!! I love the pattern....and the colors much more.
Maybe you can give me some classes soon.

So talented!
YEA!!! LOVE the pattern, too!

I love the fabric....it is so pretty!

Congrats Sam!! it looks so pretty! and love the fabric choice! Great job!
You must be so proud of yourself, I still remember when I started beading...I learned from a book and it took a long time to learn the basics but once I did it, I felt so happy!
Congrats and keep you the good work!

KEWT pillow Sam! Those envelope pillows seem simple, but if you ask me, ALL sewing is hard...think it's a skill you need to learn as a child to ever be perfectly comfortable with it...at least that's true for me lol!