I finally did it!

No less than a dozen people have asked me if I participate in food co-ops over the last two
years. (Arizona has Bountiful Baskets. There's a similar service called Door to Door Organics
that my Michigan friends can use.) Everyone says the same two things. One, they love it.
Two, they think it's so me. And really, it is. I mean, I'm a vegetarian who likes to cook and is
all about living in an eco-friendly way.
Until today, I've passed on the idea, because I wasn't cooking at home enough, or I thought
David and I wouldn't be able to make it through all the produce before it went bad. But I'm
cooking quite a bit lately, and we're going through a ton of produce. So, when Barb -- the
most recent person to ask if I was doing this -- said it was so me and went on and on about
how awesome it is, I bit.
The general idea, if this concept is new to you, is that you pay for a basket of produce.
You don't know what you're going to get until you pick it up, except that it's mostly local
fruits and vegetables pulled out of the ground days before you bring it home. That means it's
not being trucked in from Peru (decreasing your carbon footprint) and sitting in warehouses,
trucks and stores for days or weeks before you eat it (increasing freshness). You're also
buying into a community effort that's designed to keep prices low (saving money).
You can upgrade to an organic basket. You can also add-on other options like bread or a
basket of Mexican veggies. I mean, it's a fabulous idea.
I drove all of a mile and a half this morning to a park (no windowless grocery store lit by
fluorescents with manufactured air) and picked this up for 15 bucks. Cat not included. :) 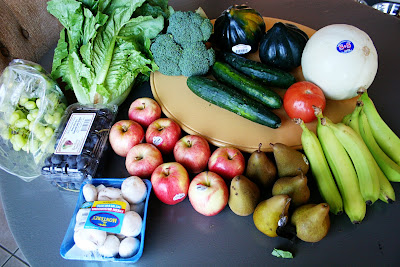 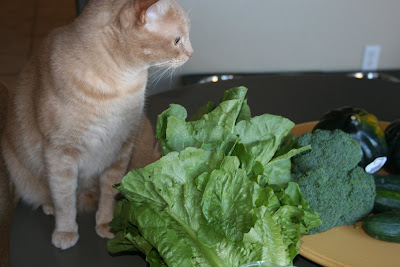 I am so excited about it. This is something I've had on my I-know-I-should-be-doing-this-
list for a very long time. It's fun to try new green living ideas and new things, in general. I
already know what I'm going to do with the pears and acorn squash thanks to a recipe
Mary made when we were visiting home in August.
And with that, I'm off. I hope you're all having a wonderful Saturday. Cheers!
Posted by Samara Link at Saturday, September 18, 2010

I see a smiley face in your food. :o)

Signing up for the first basket is always the scariest! :) You're lucky to have a pickup site so close to home!

GREAT idea! So let me tell you, like 2 months ago I picked up a flyer on a coffee shop that advertise this kind of service in the Boston area. They offer you a delivery every 2 weeks or every month and you can pick all fruit, all veggies or mixed. Also, they ask you about your tastes so you don't get something that you don't like. Anyway, since I saw the flyer I thought about you! So yes, this service is soooo you! :)

I love this idea! I need to start looking locally at what might be available to me :)

I hope you loved it as much as I thought you would. We are having so much fun experimenting with new recipes. It's been a fun kitchen at our house the last couple weekends enjoying our baskets. Did Oliver benefit from any of the delicious home cooking? :)