On Friday, when David came home, I was excited for him to taste my first ever attempt at
making vegetarian cabbage rolls. He had two and said the sauce was great, but it was a lot of
cabbage. A few minutes later, he ordered pizza.
On Saturday, when he got back from golf, I proudly proclaimed, "Look what I made for
dinner." It was this multi grain pilaf Mediterranean salad that was totally delicious, btw.
He looked at it, tasted it, nodded, and said it was good. Then, he went to the bedroom to
change his clothes, came out with keys in hand and said, "I'm going to get some meat."
Hmm?
I realized we only cooked meat at home twice during June. Both times, it was chicken, and
he grilled it. (I made a really good chicken salad for him with it.) But that was it. The only
other meat he's had this month was from ordering lunch and dinner out.
My non-vegetarian husband had been awfully patient with all the vegetarian cooking I've
been doing. He's liked most of what I've made, but he's described a lot of it as "Earthy".
Personally, that's what I like and was going for, but it's a little too natural tasting for him
day in and day out. He was clearly ready to get his carnivore on, (even though he's been happy with a more plant
based diet in general). So, I wanted to make something special for him that included meat. I
made two dishes from my fav Martha Stewart's Food Everyday. I cooked both of them for
the first time in March. So, they weren't new recipes, but I knew he liked them then and
would again.
1) Tamale Pies. Simple cornmeal crust with ground turkey, onion, tomato, corn and jalapeño
filling that's topped with shredded cheese. Then, I put those in the freezer so they're there
anytime the mood strikes.
2) Baked Pasta. David raves about this dish. It's such good comfort food, great for the
weekends or evenings when everyone is tired. What I love about it is the recipe makes
enough for two casserole dishes -- one for now and one to freeze. The flavor is solid, too.
I made a few slight changes that are reflected in the recipe below:
INGREDIENTS:
salt, pepper & olive oil
1 medium red onion
4 cloves garlic, minced
1 can whole tomatoes with juice, lightly crushed with hands
1 tsp. oregano
1/2 c. heavy cream
1 lb. rigatoni, cooked al dente and drained
10 oz. frozen spinach, thawed and drained
1 pkg. Jenny O Turkey Sausage
9 oz. fontina cheese with 6 oz. cubed and the rest shredded
1/2 c. grated Parmesan cheese
HOW TO DO IT:
Cook pasta in salted boiling water until al dente. Drain. Put back in pan. Add spinach. Set
aside. Meanwhile, cook the sausage in a large sauce pan on medium heat. Get it browned
on all sides. Take it out, cut the sausages in half lengthwise, and then chop it up into large
chunks. Put it back in the pan to finish cooking. Remove cooked sausage with tongs, place
it on a plate covered with paper towel to drain. Keep drippings in pan to flavor onions.
Add chopped onion to pan, toss often, until soft or for about three minutes. Add garlic. Cook
for another minute or so. Stir in tomatoes and oregano; cook until tomatoes are falling
apart, 10-15 minutes. Add cream; cook until warmed through, about 5 minutes. Season
with salt and pepper.

Now add cream sauce, sausage and fontina to pasta pot. Toss to coat. Season with salt and pepper. Divide evenly between two shallow 1 1/2-quart baking dishes. Top with grated
fontina and Parm. Bake in a 400 degree oven until browned edges are crisp, 20-30 minutes.
To freeze -- Do not add shredded cheese to the top. Let cool completely. Cover tightly with
plastic wrap and then aluminum foil. Place in freezer. Do not thaw before baking. Remove
plastic wrap and recover with foil. Cook until heated through, 1 1/2 to 1 3/4 hours. Remove
foil, top with grated fontina and Parm. Bake another 20-30 minutes, until edges are browned.
(The only down side to freezing this is the time and energy it takes to reheat it.) 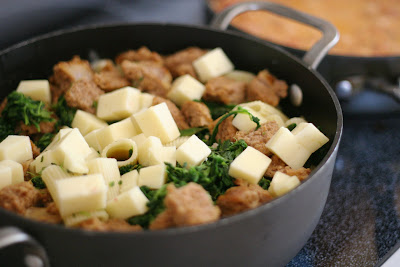 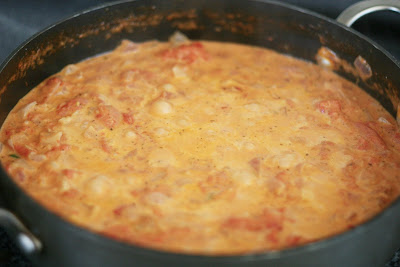 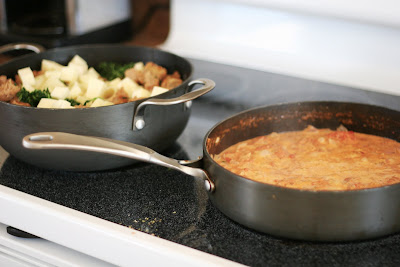 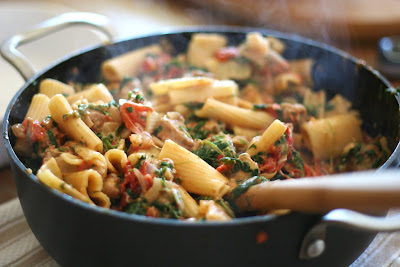 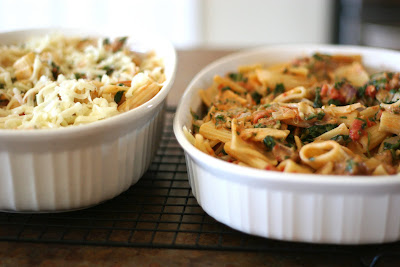 He was at the Diamondbacks game with coworkers and a vendor last night when I made
this. So, he'll be feasting on it tonight .... while I eat leftover vegetarian cabbage rolls again.
Works for me!
Posted by Samara Link at Tuesday, June 22, 2010

That's kind of funny, but I'm betting it has to be at least a little bit soul crushing to work so hard on something you think came out well and then have him order a pizza! That pasta looks amazing - it's making me hungry just looking at it.

I am with David for the most part...I like meat! But I also like veggies and other "earthy" stuff as well. The pasta dish looks so, so good!

my hubby goes out for pizza too...he's actually on a junk food diet and has been for a while, even though he agreed to go raw with me.

i stocked my new frig with loads of burritos, frozen trader joes & meatballs for those times, but i did balance it out with a bunch of huge bags of mixed veggies....i'm feeling real lazy in the cooking dept. these days.

i will try your recipe...i love pasta with lots of stuff in it!