I don't eat meat, and I don't cook every night. So, it's super easy to get lazy with food.
(Cheesy bagels, anyone?) When I do cook, I'm afraid I too often rely on my Mid-Michigan
roots, which are entrenched in the comfort food variety of the one dish casserole. I don't
even really like that kind of food very much, but I know it, it's easy, I don't need a recipe
to make it, etc. Of course, I don't always cook like that, but it happens more than either
David or I would like.
So, I decided to work towards making better habits, using of my goal for June to push me
along. I do alright with the food thing but not consistently enough. I want to do better with
planning meals that actually taste good, giving me a sensual food experience. And put
together meals that give me the nutrients and vitamins I crave, that fuel my body. I guess
they call that taking care of yourself. :) I'm 32 and just figuring this out.
David has been eating a lot less meat, which thrills this vegetarian! He still eats it, but he's
trying to buy better, leaner meats and eat them less often. We were both on the same page
-- wanting to make some healthy dishes with lots of good, fresh, organic produce. He also
doesn't like "meal rotation". Even if I make the same thing a month or two apart he notices.
So, part of this is a challenge to find some new things so I don't hear him say that again. :)
To kick things off, we took a trip to Sprouts (which is a whole three miles from home). The
produce was amazing, and I've been back for more since. When we went together, David got
beans in bulk. We eat a lot of them out of the can, but he grabbed a couple scoops of dried
beans and we soaked them at home. What a difference! I couldn't believe it.
I wanted to share some of the things we've come up with recently in case you're in the
same rut and looking for some healthy food-spiration ... 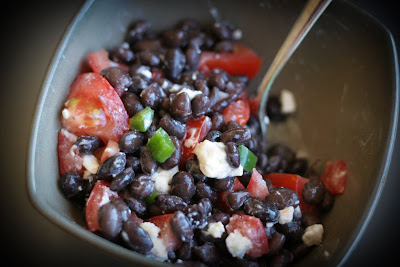 A new David creation that I loved -- black beans, fresh tomatoes and jalapeños, with feta. 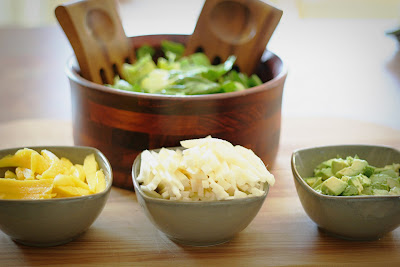 Summer salad -- I discovered it at a Pampered Chef party recently. Greens (I used spinach
and romaine) tossed in fresh lime juice, salt and pepper. Served with slices of fresh mango,
jicama and avocado. No dressing required. I topped mine with a little grated white cheddar
cheese though. Loved it! I learned D doesn't like fruit on his salad, and he won't eat jicama.
He just made a salad with the avocado and some tomato. So, it worked out. 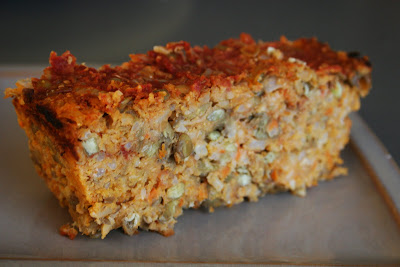 Lentil Loaf -- Recipe here. I love lentils but, until now, I've only ordered them when out.
Now I know, they're so easy to use, cooking up just like rice. The flavor combination of this
dish was awesome; right up my alley. David ... not so much. His loss, I say. More for me! The
recipe said to cook it for 30-45 minutes. I'd cook it less rather than more. I found the recipe
for this on a blog I recently discovered called All Home Cooking, All Year Long. Her photos
are good, the writing is concise, and her recipes look delicious and healthy. Check it! 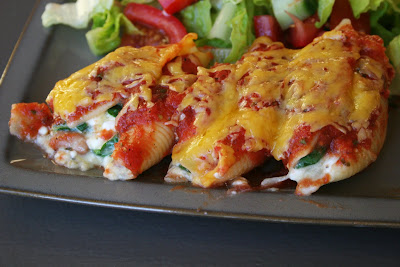 Vegetarian Stuffed Shells - We loved these. I think stuffed shells are usually too mushy and
lack on flavor. Not these! The reason? Cottage cheese instead of ricotta and beans, which
really added a great texture. Plus, seasoning, spinach, onion, garlic, etc! This recipe is also
from All Home Cooking, All Year Long. I doubled the spinach to add some veg, and as always,
I used a little extra cheese. 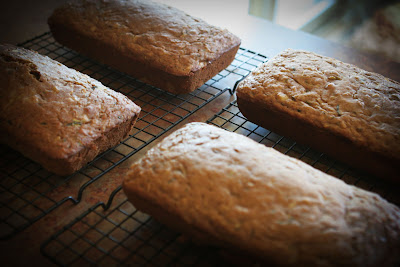 Zucchini bread -- this is the first time I've ever made it surprisingly enough. We got a huge,
garden grown zucchini from a friend. David wanted me to make zucchini bread with it. So,
I found this super healthy version of it online from Mayo Clinic. Very good! David discovered
that it's amazingly good when cut up in bite sized pieces and sprinkled over vanilla ice cream. 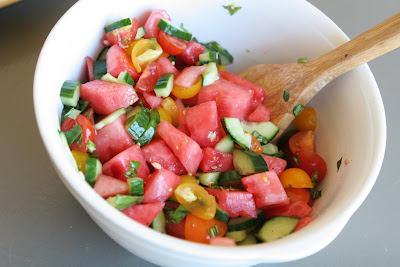 Watermelon, tomato and cucumber salad -- It rocks. Mary (D's stepmom) learned of it at
a cooking class. This was my first time making it at home. Seedless watermelon, cherry
tomatoes and seeded cucumber. Add chopped, fresh basil with pepper and a bit of olive oil.
All in all, I'm super happy with my efforts so far toward my June goal of making new and
delicious vegetarian dishes with lots of produce. But you don't have to be vegetarian to
like these things. This is just plain good eating. I've cooked as much in the last week and a
half as I usually do in a whole month. (I've made a few other things, but either they weren't
new or they weren't vegetarian. So, I didn't include them here.) I have had so much fun with
it, and the whole process (planning, shopping, experimenting, cooking, eating) has been
totally satisfying. Hopefully I'll have more to come before the month is over.
Is there an ingredient you like but never cook with?
Have you tried some new recipes lately? Where do you look for inspiration?
Posted by Samara Link at Thursday, June 10, 2010

Those look really good. I wish I liked beans. It would make my life so much easier! Cheaper and healthier at least. I'm like David that I'm not really into meal rotation, as you put it. I don't know how people do that weekly schedule where Monday is pizza, Tuesday is Tacos, Wednesday is chicken, etc. I'd go insane. I have a few things I go back to again and again, but generally not more than once in a month.

I don't cook enough for my meal rotation to be weekly. It's more like once a month or two or three. Sometimes I'll make a dish again three months later, and that's too soon for him, usually. Keeps me on my toes. Yet, interestingly enough, he makes the same four things when he cooks!

Mmm... looks great Sam!
I just scrolled down and looked at pictures and read a tiny bit, I'll get back to it later. But I wanted to comment on the watermelon/tomato salad. I happened to watch Rachael Ray yesterday and she made this. (So funny!) Anyway, she puts green toms and red onion in it too. Just thought I'd share that!
:o) Love your food posts!

Very good Sam, I am working on the mexican lasagna to send it your way.
As a side comment, in Mexico we usually don't use salad dressing, we use lemon and salt or chilli powder with salt, healthier than any dressing out there!