{I Really Like Your Peaches. Wanna Shake Your Tree.}

I spent some time fantasizing about making peach cobbler and peach pie with my stash
of fresh peaches from Schnepf Farms. Then reality came calling, and it said I should
consider my options. I am one of two people that live in this house. While I love anything
with baked fruit -- pie, bread, cobbler -- my triglycerides don't. And since the other one
of us isn't a huge sweets guy, I knew I'd eat too much of it if it was here. And then, in a
weak attempt to bring my fantasy cobbler into reality, I browsed for recipes. Seeing what
is in that stuff confirmed I would not make it. Not today!
So ......... I made Peach Jam. It was my first every jam/jelly/preserves attempt. 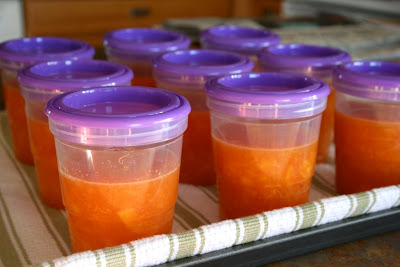 The recipe was so, so simple. Like, I've heard people say making jam is really easy, but I
always thought maybe they were exaggerating the simplicity of it all. Turns out, not so
much. It was totally free of complication. I chose a recipe by Michelle's because it only
called for one a half cups of sugar (as opposed to the five or seven cups in other recipes).
I followed her tips exactly, even down to the containers she used. I don't love how these
look -- all housed in plastic -- but I've always felt intimidated by the idea of jarring
anything. So, Ball's plastic freezer friendly jars with screw on lids won me over. A few
minutes later, we had nine little jars of peach jam. Of course, it's delightful on bread.
David's had some over vanilla ice cream and angel food cake, too. I was so happy it
turned out well!
And then ......... we made Peach Sorbet. Another first for us, and it was ultra easy. 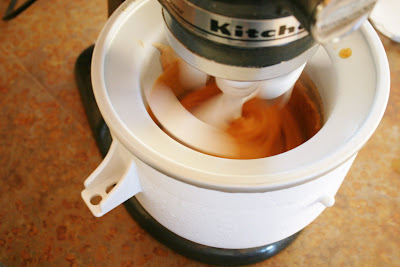 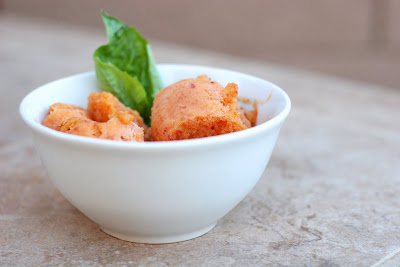 David went to Macy's with me to buy the ice cream attachment for our KitchenAid mixer.
Then, we made the sorbet together the next day. I chose this recipe, another one from from
Michelle. It was too pure and natural to pass up -- peaches, honey, apple juice, ground
cloves, and cinnamon. That's it. No cream and no sugar! We both agreed next time we'd
use a little more honey and go lighter on the spices, but it was still very good. Another
simple, easy venture in the kitchen. I'll definitely look around for some more sorbet and
frozen yogurt recipes. (If you have one you love, please share.) I'd like to do this again
now that we have the ice cream maker.
I had a few peaches left after all that ......... So, I whipped up some heaven on a plate.
Peaches roasted with fresh rosemary over angel food cake and vanilla ice cream. 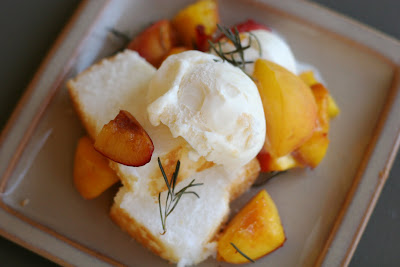 This might have been my favorite. It tasted very gourmet. :)
Now I know I could have easily handled twice the peaches. It seemed like so many when
I was picking them, but I found a lot of good ways to use them up quickly. It was a fun
adventure with a beautiful, pesticide-free, fuzzy fruit. I'll definitely do it again.
Posted by Samara Link at Friday, June 25, 2010

Email ThisBlogThis!Share to TwitterShare to FacebookShare to Pinterest
Labels: food

Oh yum!! I would love to try these. I have never done anything with fruit other than banana bread so I was a little intimidated. I trust you when you say it is easy, I have gotta try it!! I also need an ice cream maker :)

I used the same Ball jars when I made jam, and I pretty much hate them too. I'm having fantasies of pretty little Weck jars for next time I make jam.

I also was horrified when I saw how much sugar the recipe called for, but everything I read said that you couldn't cut it because the sugar actually acts as a preservative, which I found interesting.

I have a great strawberry sorbet recipe, but it uses 3/4 cup of sugar. It's so flipping good though.

Looks so pretty!! You can use Truvia that is natural sweetener, one spoon=two sugar spoons. Also, I don’t know if D likes meat and sweet but you could make him a pork loin brushed with peach jelly. Great great job Sam!