One of my goals for January -- make some new vegetarian dishes.
I started the month off with a big pot of homemade vegetable soup. It wasn't a new recipe, but
it was simple, healthy, and cozy. Last night, I made my first ever homemade macaroni and cheese. I used Alton Brown's recipe. It was good, but I'll go heavier on the cheese and lighter
on the panko breadcrumbs by half if I make it again.
In between, I tried something new: Cuban Black Bean Stew with Rice
* Tasty
* Super easy to make
* Not a big time commitment in the kitchen
Three things that I love and often require from a recipe. 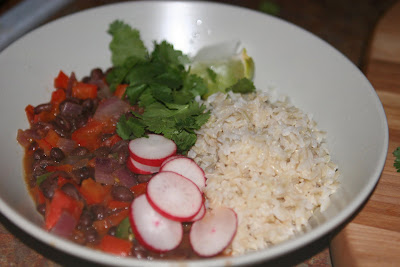 I modified this recipe from Everyday Food just slightly. I find you have to do that to their
ideas to spice them up a bit. My changes are included below.
2 cups brown rice
1 tablespoon olive oil
1 large red onion, chopped
2 cloves garlic, chopped
1 whole jalapeño, removing all but 1/4 of ribs and seeds
2 red bell peppers, chopped
2 cans (19 oz each) black beans, drained and rinsed
6 or so vine ripened tomatoes, chopped
1 can (14.5 oz) vegetable broth
1 tablespoon cider vinegar
1 teaspoon dried oregano
coarse salt and pepper
lime wedges, fresh cilantro & sliced radishes for garnish
Prep rice according to package instructions.
Heat oil over medium in a large saucepan. Add onion, garlic and peppers.
Cook stirring occasionally until onion is softened, 8 to 10 minutes.
Add beans, tomatoes, broth, vinegar, and oregano. Cook, mashing some
beans with back of a spoon until slightly thickened, 6 to 8 minutes. Season
with salt and pepper. 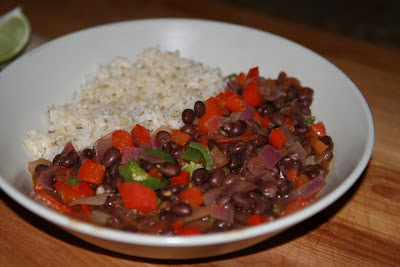 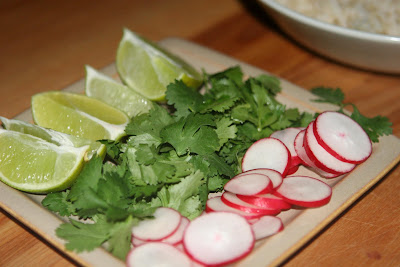 Garnish up and enjoy. (The lime and cilantro make this dish.)
NOTES: I made this again (4.18.10) and used one can of black beans and one can of white
beans. I actually liked it better. It changed up the texture and added some color. Also,
for just the two of us, I could go a little lighter on the rice next time.
Do you have any vegetarian dishes you love? If so, I'd like to hear more about them.
Posted by Samara Link at Monday, January 11, 2010

Super cute presentation, Martha!
I love all the colors in the dish. It's really pretty! And looks tasty too!

I'm definitely going to try this. I love Cuban food and I love black beans. If I come across any veggie dishes soon I'll share them.

Mmm... lime and cilantro make so many good things better!

That looks amazing!! I'm so proud of my veggie friend =) Heres a recipe from my book called "RAWvolution" By Matt Amsden (one of my favorites)...its absolutely delicious, not to mention completely "raw" ..which is basically the ultimate level of veganism.

Soft Taco with Fresh Tomato Salsa:
Serves 3-4 (Gary and I ate it all and it was perfect)


The BEST part of eating raw is there's absolutely NO cooking (oven, stove, etc) involved. You basically just get all the fresh ingredients and throw them together! This is also a favorite of my meat-eating family..it was given two thumbs up by my dad..and lets just say he's not a veggie kinda guy. haha here's a link to the author's website:
http://www.rawvolution.com/?q=rawvolution_cookbook

Hey Sam!!! Looks like you had a fab and gorgeous Christmas! When you coming for a visit to Colorful Colorado? Would love to have another StitchnBitch session!