{Allergies Be Damned. We're Comin' to Get Ya. Even if it Takes All Year.}

This girl has had a good life, for the most part, in her two years
on this planet. 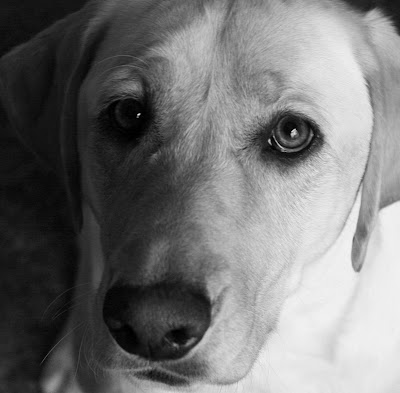 Our Norah is sweetness personified. So, it kills us a little bit to
watch her struggle with the reoccurring infections she's been
getting. They started when she was just a tiny puppy. The vet
said allergies could be really tough to figure out. Since puppies
sometimes outgrow them, he suggested we see if she would.

So, we waited.
But no dice.
They didn't go away.

What was happening inside her little body -->
- She was getting exposed to something she was allergic to.
- That would throw her antibodies out of whack.
- And that would weaken her system.
- Then, she would get an infection.
The infections were extremely regular and easy to spot. Pretty
much always on her belly in the form of BRIGHT RED skin and
spots almost like acne. It looks so painful.

Really though, they didn't seem to bother her. Each time she
would get one, I would take her to the vet ($) and get her on
antibiotics ($). The infection would clear up while she was on it
and then reappear within about five days of her being off it. At
which time, we'd load up in the car for another trip to the vet
($ -- you get the point. This has been an expensive venture).

During this time, we started food trials to try to figure out if it
was what we were feeding her. We were hoping to find the
answer in food since it's the easiest allergy to control. We used
the d/d Vet brand of food -- venison and potato formula -- and
we fed it to her for three months. (The hardest part was not
giving her any of our food. We were allowed to give her raw
veggies. That's when I learned she likes cauliflower & carrots!)

After three months of that -- and five rounds of antibiotics -- we
were at a loss.

The next step -- take a blood sample and send it in for screening
to this lab that does some pretty cutting edge allergy testing for
animals. Feeling so thankful for them. They gave us the answers
we were looking for! (We think, anyway.)

Those angels of veterinarian medicine took the allergy test results
and made a serum especially designed for her. In other words, an
allergy shot. Just for our Norah! How cool is that?

When Dr. Dunning called to tell me the results were in, I was
absolutely gleeful to have some answers so we could help her
feel better. Simultaneously though, I felt really tearful and
terrible because we had been unwittingly POISONING HER
FOR TWO YEARS. Still getting over that.

Onto the results. The food items were the most noteable to us --
Pork, milk, rice, flax, oat, white potato, and kelp.

So, MILK BONES made with MILK that we've been giving her
since she was a puppy. POISON. The venison and POTATO food
we gave her while on her special food diet. POISON. The OAT-
MEAL D often gave her on the weekends. POISON. The FLAX
in nearly every single brand of dog food made. POISON. The
RICE and chicken we made for her every time she was sick.
POISON. Not to mention the Eukaneuba dog food she's been
eating since the day we brought her home. POISON.

What the fuck?! Seriously?
There aren't words to describe how badly I feel about that.
Breaks. My. Heart.
Norah, mommy is so, so sorry.

We're in the process of looking for a dog food that will work. The
problem -- when dogs have food allergies, the allergy is usually
to oats and/or rice. The allergy friendly food then uses potatoes.
She's allergic though. And they almost ALL have flaxseed. Raw
looks like an alternative that would circumvent those ingredients,
but it's very expensive. Like we figured out it would cost $120 a
month just to feed her. No thank you. That's not gonna work.

For now, we're feeding her this food ... 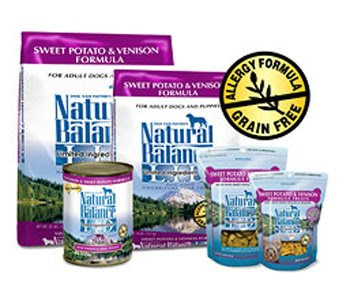 because it's made with sweet potatoes instead of the white
potatoes. No rice or oats. It does have potato fiber and flax
in it though. So, I am looking for something better. This only
gets us half way there.

The list of other things she is allergic to...

I had to look several of these things up to try to figure out if we
were unknowingly exposing her to them. In particular, the indoor
allergen -- orris root. It's used in "perfumery". So, I have to cross
check that to some of my smell pretty things. It's also in some
kinds of gin (Bombay Sapphire). We're okay there because she's
a scotch drinker. And it's a fixative. I don't know what it's used
in though besides homemade toothpaste, which we don't use. I'll
continue scanning ingredient lists and googling items I become
suspect of to see if it's in our house. If you are an orris root expert
or know anyone who is, please do enlighten me. [Update: Carlene
tells me orris root is a fixative in potpourri.]

We picked up her allergy shots!
So, we can start doing something to help her!! 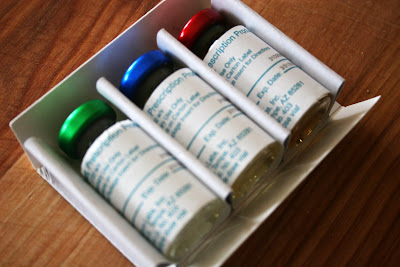 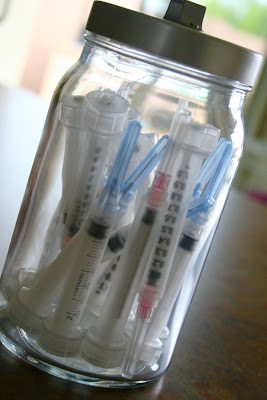 The vet showed us how to give them to her. Easy peasy.
We paid for and brought home the first nine months worth of
her allergy serum. They have a schedule and we'll give them
to her accordingly. 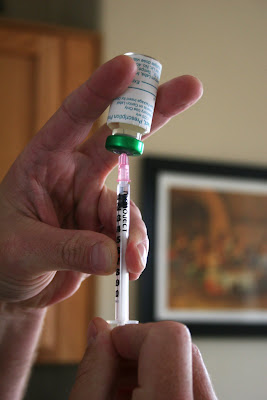 The last three months -- rounding out the year -- she only needs
them once a month. I guess we'll get those when we get closer to
the time when she'll need them.

So far, so good. No bad reactions from the shot. Neither of us
think she is feeling particularly good the day of the shot. Hopefully
that will improve as she gets more used to them. In the meantime,
she just gets extra love.

And that ends the very long story of Norah and her allergies.
If you took the time to read this whole mess, you deserve a gold
star. You do. Let me know, and I'll send you one. :)
Posted by Samara Link at Saturday, April 11, 2009

Email ThisBlogThis!Share to TwitterShare to FacebookShare to Pinterest
Labels: Norah

Poor Norah!!! I had allergies too, I know how much they suck! But the shots totally help, and I know that in time people can go into remission and not have to have them anymore...(fingers crossed!)
Have you ever thought about making your own dog food? I read up about it awhile ago, but then started using the Halo organic dog food, so didn't do it...anyway, you could definitely do that more cheaply than that crazy expensive dog food!
Here's hoping Norah thrives on her shots!
(p.s. Orris Root is also used as a fixative in potpourri)

Oh Norah, poor baby! You can't blame yourself because you have been trying to help her by changing up her diet. Wow, she is allergic to so many things...how could you know? Glad you now know the specifics of what she is allergic to now and that this will be the long-term solution. I LOL when you said she's a Scotch drinker, not into Gin!

Holy crap - that's a LOT of allergies! Poor baby. I have an itchy dog too, but we haven't done the bloodtest because of the cost. (If you don't mind me asking, what did your vet charge for that?) I'm sure grass is the main culprit. We left her with friends while we were out of town for a week and a half and her belly had cleared up and she was fine. They have NO grass, only gravel. We also feed her the Natural Balance - the sweet potato and duck formula.

I'm glad you were able to get Norah the help she needed!

Poor Norah Bean, she's such a trooper! So sweet of you to go to all this trouble to make her more comfy! I think by this time you could probably register yourself as a vet! Or a pharmacologist.
Also, I never would have pegged Norah as a scotch drinker. I would have gone with vodka! :o)
Love you all! Hope Norah is feeling better soon!

jennputney said...
This comment has been removed by the author.
7:52 AM

Poor baby girl!! My dad's bulldog has allergies too but luckily he is maintained on bebedryl and keflax. (I am sure neither of those is spelled correctly - lol!!) Stop being down on yourself!! You took the time and made the effort to figure it out...You are a good momma to your pooches, so take heart in that.

Ooooooh!!! Poor Nora!! Please give her some extra hugs from me as well! You've got a tough one with her diet restrictions but she's sure got the best parents for getting through this!!!