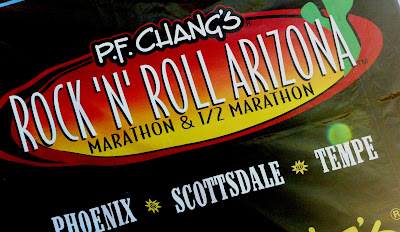 David has done a lot of running this year with the goal of
participating in the PF Chang's Marathon earlier this month.
He's improved cardiovascular fitness, lost weight and stayed
dedicated in his training whether running with Barb and Jason
or on his own. A few weeks ago on a 20 mile run, his knee really
started bothering him. He ultimately decided to run the half
marathon instead so he could give it some time to heal and get
strong. He still has the goal of running a full, and I know he'll do
it. He and Jason are signed up for the Seattle marathon in June.
I'm getting ahead of myself though! Let's start with the PF Chang's
1/2 Marathon that he just finished. 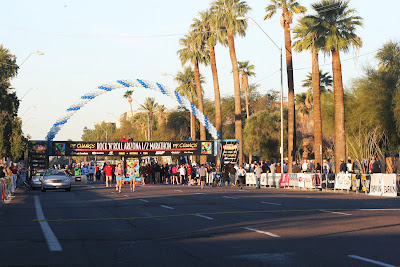 The starting line from where I watched. Palm trees and all.
They took off in downtown Phoenix and ran into Tempe
(where ASU is). Pretty cool way to spend the morning. 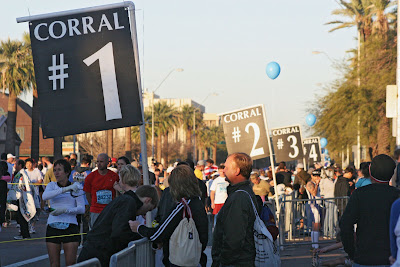 They started the race in waves, letting one group or corral
go at a time so the runners had room to run. There were
something like 25 corrals. My runners were in the 5th one. 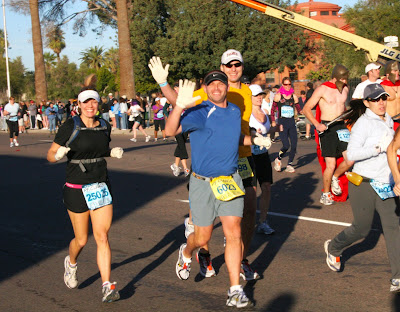 I waited a little down the street so I could see them as they
took off. That's David (in blue), Barb (in black) and Jason
(in yellow). Did I mention Barb ran this and she's three
months pregnant? Yeah, she's awesome. 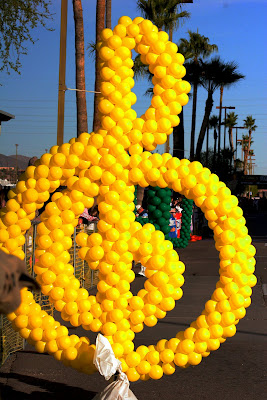 The race is called the Rock and Roll Marathon. There
were bands playing every other mile and cheer leaders
in between to keep the runners going. These musical
notes were all over the marathon finish. 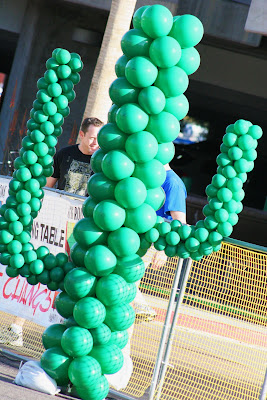 Cactus, too. A little representation of Arizona. :) 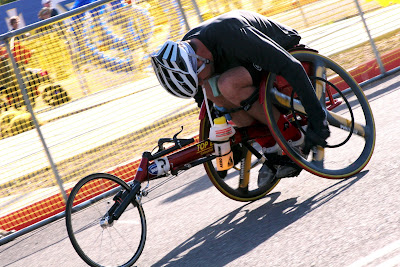 The first of the wheelchair participants coming through. 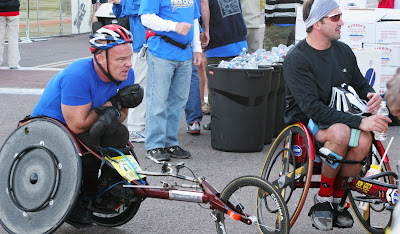 Watching them start and finish a 26.2 mile race was totally
inspiring. I can't imagine what time they had to get up in
order to get out of bed, get ready and get there for the
7:30 AM start. 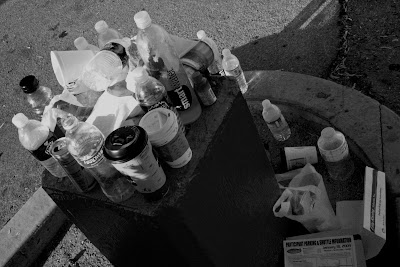 David and I have talked about how running is not a green
sport -- all the shoes, the synthetic clothes, driving to all the
events. There were bottles everywhere. I wanted to collect
them all to be sure they were recycled. I resisted the urge. :)
They did try - here's some info on that, if you're interested. 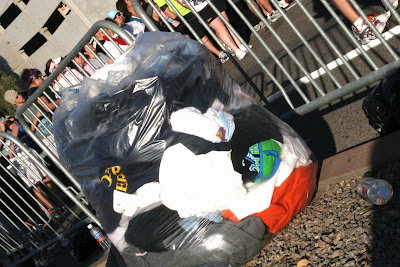 It was chilly that morning (but not nearly as cold as it has been
in past years, from what I heard). So, they did a really cool thing --
as runners shed their outer layer right before the race started,
they tossed them to the side. Goodwill was there to collect the
discarded items and prep them for donation. There were also
quite a few homeless people in the area, collecting some warm
clothes right then and there. This was one of many, many bags. 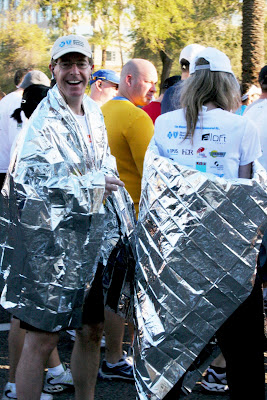 Speaking of chilly, here's an all-smiles couple
in warming blankets. 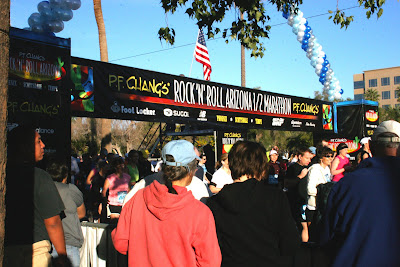 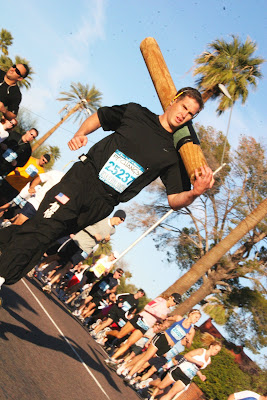 This crazy bat carried a freakin' log for 13.1
miles. What a bad ass. 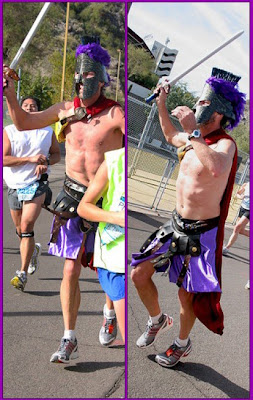 While I didn't get a shot of the guy in a full
Elvis costume, I did get gladiator guy.

A few other random snapshots from the day... 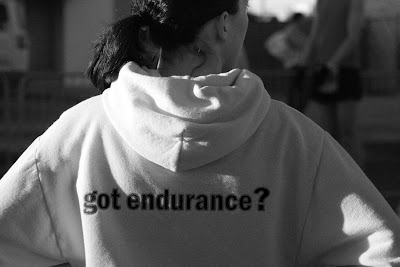 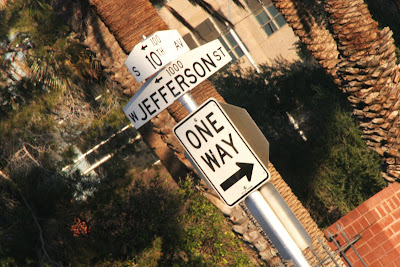 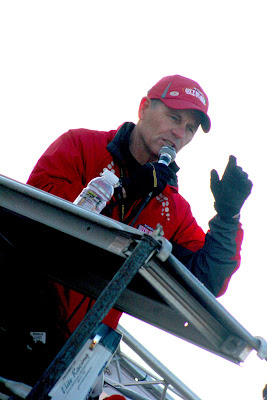 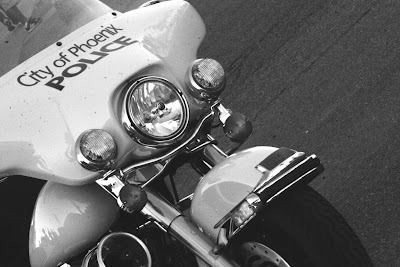 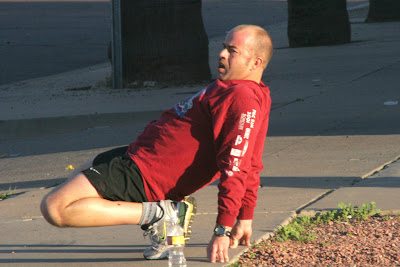 I finally found a place to watch David come towards the finish.
It wasn't set up to be very good for spectators, and I was
actually kinda pissed about it. Maybe disappointed is a better
word. If they could have just run into the stadium instead of
the stadium parking lot, it would have been perfect. There were
so many people watching and waiting; which was great. It's just
that were standing on a flat surface. I finally found a spot to
squeeze into, but I only saw David as he passing by me, and
I didn't get to see him go through the finish because there were
so many other people there. Grr. But I'm not bitter. :)
All that said, I did see two of the three other people we knew
that were running before the start of the race, which was
great. 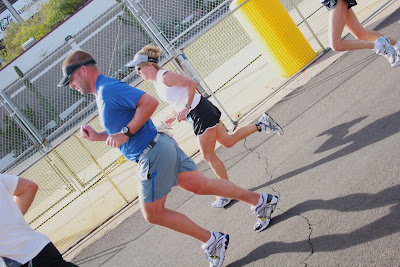 Here he is! On the home stretch with probably an eighth
or a quarter mile to go! He made great time!! Came in under
the two hour mark -- by about 10 minutes. 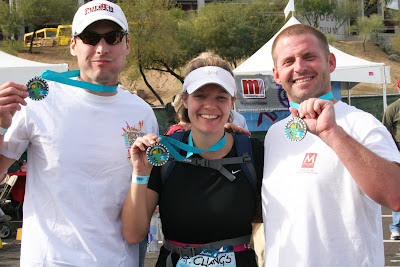 Jason, Barb and David with their half marathon metals!

Apparently they're going to air the whole race on TV at
the end of the month: "The Official Race Telecast will air
locally on FOX 10 on Sunday, Jan 25, from 3 to 4pm (MST),
and nationally on FSN on Saturday, Jan. 31. Check your local
listings for FSN air times." 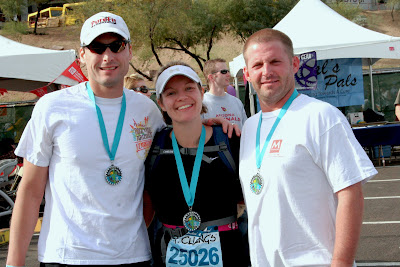 It was a nice event and a fun day. Congratulations on a great
finish, guys.
Posted by Samara Link at Tuesday, January 27, 2009

Way to go David! And other friends!

i'm so jealous of the dediction that people have when they run a marathon. i'd die in the first 100 yards. seriously.
i love the b&w of the running feet. :)

such fun pics sam! yeah David! Let me know if you come up to Seattle-- I'd love to drive up and see you!

Very impressive and I love your photos, Sam!!!