David's grandfather passed away a couple weeks ago. We were really sad to
get the news. He'd been having some health issues for about a year now, but he
was doing great despite them until Easter when he wound up in the hospital for
about a week. Since then, he'd been home with Grandma Link, and they were
getting a lot of help and support from their family. I'm so happy for them they
were able to be home together for that time. And we're so sorry they can't be
together now.

I've only known them for a handful of years now, but they are unquestionably
good people who have made an amazing team. Together, they have been
dedicated parents and grandparents. David has so many nice memories with
them. They have been a big part of the community, each a selfless spirit,
they've given so much of themselves to make the world a better place to be.
Grandpa lived a life to proud of.

There was a beautiful article written up about him in the Detroit Free Press.
When grandma emailed it to us, she said it was something grandpa would have
said he didn't deserve. We thought it was such a nice article; a testament to a
life lived with passion, purpose, sacrifice, and action.

As a parent, teacher and social activist, Eugene Link always stressed
the importance of standing up for one's beliefs.

It was a philosophy he routinely practiced in his roles as a civil
rights supporter, union advocate and conscientious objector.

"He was a person who stood for tolerance, equality and being
respectful of the rights of others," said his wife of 63 years,
Margaret Link.

Mr. Link, a social studies teacher in the Detroit Public Schools
system for 3 1/2 decades, died June 22 at his home in Redford
Township. He was 86.

Born and raised in Detroit, Mr. Link graduated from Southeastern
High School in 1938. He attended Alma College briefly before
graduating from Wayne State University with a bachelor's degree
in history in 1942. A year later, he married.

Mr. Link opposed war on religious grounds. During World War II,
he was drafted into the Civilian Public Service in 1943, where
conscientious objectors served. He spent three years working
on dam construction in Colorado and as an orderly at a Connecticut
hospital.

In 1947, Mr. Link earned a master's degree in Latin American history
from the University of Michigan. He was an instructor for several
years at the Detroit Institute of Technology before beginning his
teaching career with the Detroit Public Schools in 1951. He taught
history, economics and current events before retiring in 1986.

"He loved teaching. It was his life's calling," said his wife.
"He felt proud of the fact that he was able to influence so many
young minds."

Mr. Link marched in support of open housing in Detroit, was involved
in efforts to gain official recognition for the Detroit Federation
of Teachers and actively opposed the war in Vietnam.

"Those were all issues that were very important to him, and he felt
deeply about each one," said his son Peter.

Summers were spent teaching summer school and painting homes to
supplement the family income. He enjoyed taking the family on
camping excursions throughout the state.

Besides his wife and son, survivors include sons Arthur, Daniel
and Richard; daughter Margaret Moon; 10 grandchildren, and two
great-grandchildren. 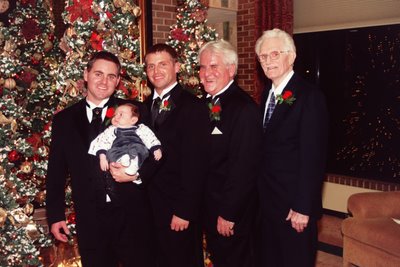 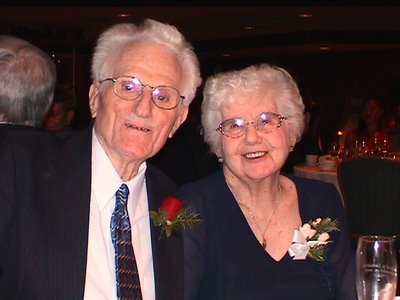 Originally, we did not think we would be able to make it back for the funeral
service. But things have changed in the last week and we decided it was a
trip we needed to and could make. While it will be a short visit, with us in the
country from Thursday evening through Tuesday afternoon, it will be long enough
for us to pay our respects and be with the family to say good bye and celebrate
his long, wonderful life.

Grandpa, we love you and will miss you. You will not be forgotten.
Posted by Samara Link at Wednesday, July 12, 2006

What a great article. I'm sure Mrs. Link is proud of her husband and feels great that others recongize him for the truely wonderful man he was.