{Making My Freezer Work for Me}

We do plenty of quick dinners -- pasta, cereal, salad, sandwiches, yogurt, etc. But there
are times we want a proper meal. It's just that the desire for one doesn't always coincide
with the ingredients and the energy to put them together. In which case, we eat simple
or eat out -- and that just feels like settling some nights.
But no more! Because I have a plan. There's two trains of thought here:
(1) My freezer is already on and working to stay cold. So, there might as
well be stuff in it to freeze.
(2) Making some meals ahead and stashing them in the freezer will come
in handy on those days where cooking just isn't going to happen. And having
food ready to go like that, kinda makes me feel like a magician.
I started with a menu of things I wanted to cook and thought would freeze well. (See
note.) I turned the meal list into a grocery shopping list and hit the store. Then, I
cooked ... and cooked ... and cooked!
{NOTE: I wasn't totally sure how to do the freezer thing. So, I relied on Everyday Food
for the answers. They have recipes where they specifically tell you how to make them
work for the freezer. Love it!} 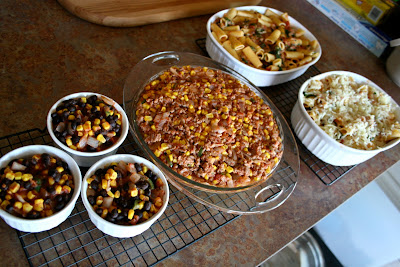 Tamale Pies (left and middle) -- half with ground turkey for David and half vegetarian
for me. My first time making these. You top them with cheese before cooking. Today I
bought 10 ounce ramekins so I have the right dish the next time I make it.
And then the baked pasta (far right) with turkey sausage was awesome. (Seriously.
Make it!) I will make this again without meat so I can really eat it. Just fyi, I used
extra cheese, doubled the oregano and used turkey sausage instead of chicken, which
I cooked before adding.The sauce was so delicious! 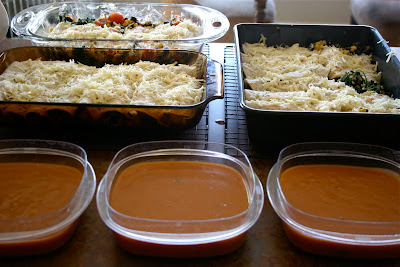 Enchiladas, half meat and half vegetables. Each pan has their own thing of sauce,
which I'll add right before putting in the oven. 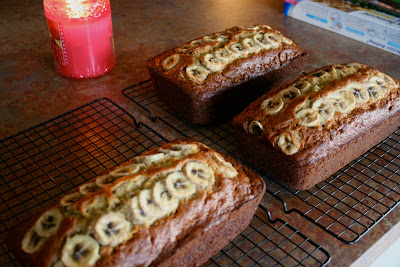 Banana Bread because I live with boy who has grown to expect a
steady supply. 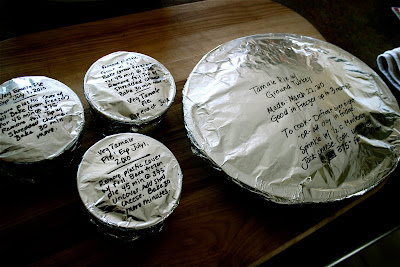 And then I wrapped everything up so it'd be safe in the freezer, and I marked
it with cooking instructions, dates, etc.
I still have two things to make for the freezer -- spinach pies and breakfast burritos.
Hoping to get to those sometime this weekend.
Ciao!
Posted by Samara Link at Friday, March 26, 2010

Email ThisBlogThis!Share to TwitterShare to FacebookShare to Pinterest
Labels: food, our house

Love this! I do this too! It really helps with the budget when you can dodge the "Eating Out Bullet". We love the breakfast burritos for the morning too. They reheat pretty well. Thanks for some good ideas!

Great idea! I need some ramekins that size... where did you find them?

woah, you are crazy organized and an amazing wife. I'm jealous...will you be my wife too?

OMG I am infested with jealousy at your organizational skillz again! I love how you topped the banana bread with slices of banana-SO Martha of you!
OK, but now 'fess up...did you go out to eat after cooking all day? lolol!

I must commend you for your skills in the kitchen, Sam. You are not only a good cook, but you are a frugel one at that! I usually cook dinner and then send the leftovers to work with my husband the next day. All his co-workers rave about his marvelous luncheons and envy the aroma from the oven while he reheats the meal. Is it any wonder he is fifty pounds overweight?!?!