I feel so fortunate to have been a part of NewsWatch and Cronkite News Service (which I
did in the second half of the semester). Combined, they were by far the best experience I
had during my time at ASU.
I've talked about my shoots, and I've shared several packages. (I have five more that I still
want to post.) However, I haven't written much about the program itself -- something I've
been meaning to do since I started the program in the fall.
In those programs, you are a full fledged member of the media. We produced four newscasts a week that aired on television, working from a fully functioning news studio. Everything is completely state of the art. The equipment and resources are just amazing. There's also a support staff that's filled beyond the brim with talent, skill, knowledge, and patience.
As students, we can't be there full time, but they want us to experience a full day in a
newsroom. So, your "class" is from at least 8:30AM to 6PM -- two to four days a week.
I did two full days. Of course, you end up staying late or doing your shooting and editing on
off days, too. It's a decent time commitment, but once you're into it, you just want to be there. It's addictive.
My focus in NewsWatch and CNS was as a reporter. So, my thing was to come up with story ideas, pursue them and turn them into packages for air. But a bunch of reporters does not a newsroom make.
We had a staffed assignment desk, producers, directors, production (technical people). Then, there were also the four main professors -- all of which had full careers as practicing journalists before coming to ASU -- that were amazing to learn from and work with. Finally, there were at least a half a dozen other people there for support. One of the local evening news anchors, for example, would come in weekly to do script and package approvals and help out where he could. Another guy was there to work with the sports reporters on stuff they produced for Fox Sports Network. Plus, we had access to the amazing Brian Snyder who is the broadcast wizard for the building. Every person there brought talent and know how to the newsroom, creating ample opportunities to learn.
The day began with everyone checking on the latest developments in the news -- the wires and social media -- and we'd make calls, set up interviews, check out cameras, etc. The morning editorial meetings started at 9AM and lasted about an hour. That's where we'd pitch story ideas and solidify the assignment for the day. Sue and Mark (our news directors) would say if the idea was a go or not and make sure we had a newsworthy and timely direction to pursue. From there, we were off to cover things and make packages. The producers started putting together the rundown for that nights newscast.

Now for some pictures: 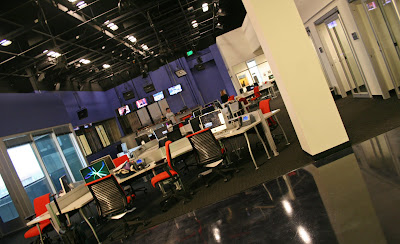 This is the newsroom. Editing bays are along the wall to the right. The assignment desk
is in the far back under the TVs. Outside the windows to the left is a terrace overlooking downtown for live shots. All the rest -- desks and computers. 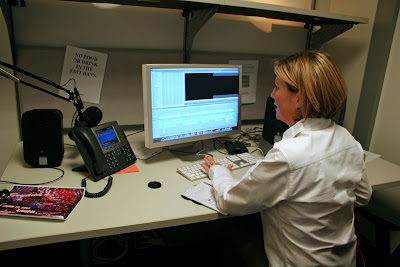 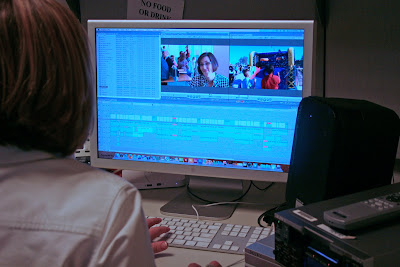 Video must be imported and edited once it's been shot.
Everything is done on a MAC and edited with Final Cut Pro.
If you click on that second picture, you can see all those little boxes on the
screen. Each one on the top row is a different shot. The two layers below it
are corresponding audio. 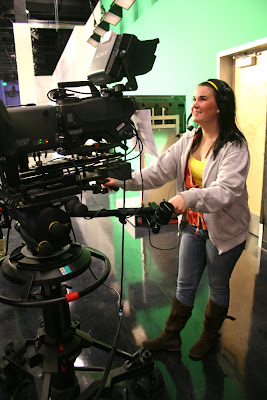 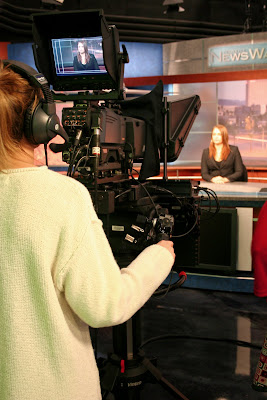 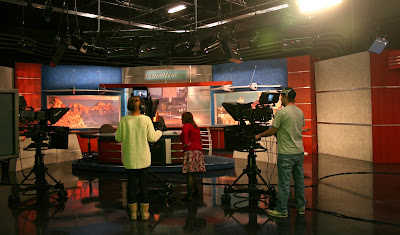 This is the studio. Nice, right?! So, that's the set, anchor desk and three studio cameras. 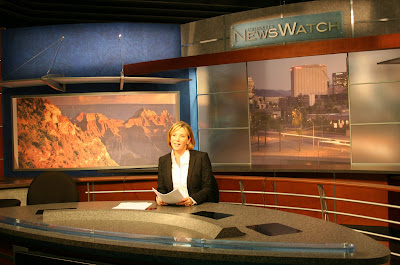 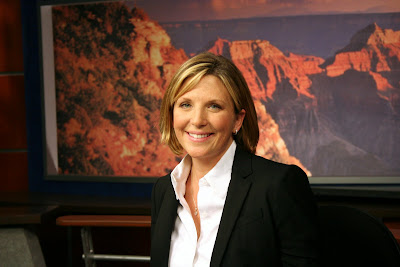 This is the anchor desk. I wasn't the regular anchor. I did two small segments called
the AZ TV Cut-in though, and it was a fun experience. This was just a practice day. 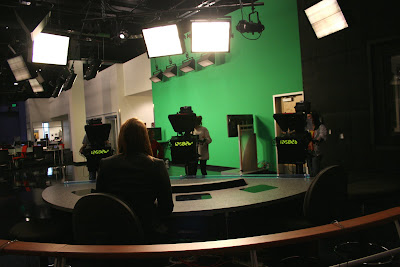 The studio from the anchors perspective. 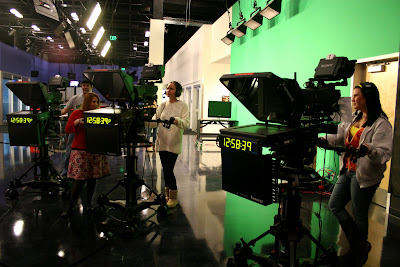 And a better look at those cameras. The prompter for the anchors would
be above the clock and video of what's airing shows on the bottom. 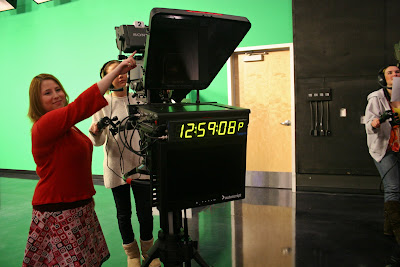 There's always a floor director during the newscast that tells the talent
what camera is live and relays information from the director. 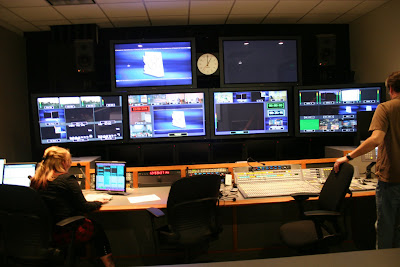 This is the control room. From here, they do everything! That means they do the audio,
watch all the cameras, do graphics, pull up all the video they're using that night, run the prompter. Essentially, they do the newscast here. 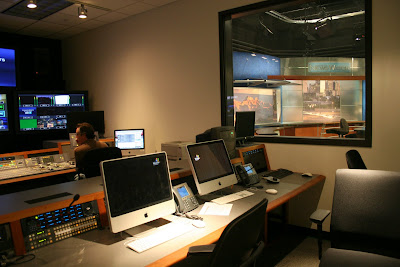 The control room has a view to the set. 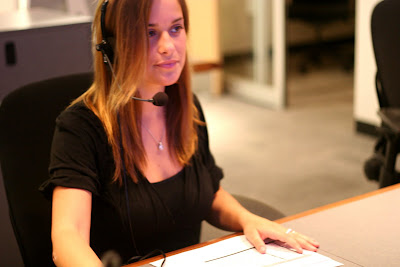 A producer puts together a rundown. That includes what will be on the show in what order
and how much time will be dedicated to each part. A director (pictured here) makes it happen. 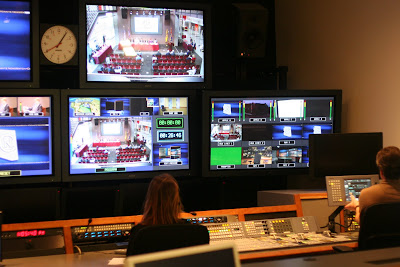 Directors have a lot to keep tabs on. They have to give orders on everything that
goes on air and make sure everyone else in the studio knows what's coming up next.
I think that pretty much wraps it up! Hope you enjoyed the tour. :)
Posted by Samara Link at Wednesday, January 06, 2010

It's wild when you see what all goes into the news. I guess most people tend to think of the news as being fairly simple - some guys behind a desk and a camera! My sister in law works at NPR and she was telling us some of the crazy things they have to keep tabs on just for the radio.

Great posts and great pictures Sam. My favorite is you behind the news desk. Glad you had fun, we think you did a great job and loved hearing about all the stories you worked on.

WOW! that is a lot of work, but it looks like a lot of fun. I can also tell that you really love this which I think is awesome. Thanks for the little insight into your world. Maybe next time I visit AZ you will be a fancy news anchor and give me a real life tour? :)

Very cool to understand the behind the scenes action! Thanks for sharing what happens back there and for all the cool pieces you put together and have shared with us!

You look mighty natural at that news desk, Sam!!!