I get a feeling where "I'm due" for an outing, and I'm just not
satisfied until I get out of town and go somewhere new.
Recently, I was due. Part of it was getting out of Phoenix and
the other part was to do something fun with Mr. Link.
So, we did a little day trip the Lava River Cave in Flagstaff on
Sunday. It was fun!
We drove into Flagstaff then headed 14 miles NW on the 180
and four miles down a little dirt road after that. 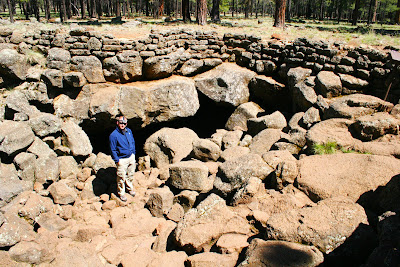 This is David at the entrance of the cave.
Here's the deal with this place:
- 700,000 years old
- lava flowed through here after a volcanic eruption
- the top and sides of the flow cooled first, forming a cave
- the rest of the lava flowed through and out
- it's 35 to 45 degrees down there all year round
- it's a mile to the end and then the same mile back
- total, 100% darkness down there ... like TOTALLY black
- loggers discovered it around 1915
- and it's free to visit and explore 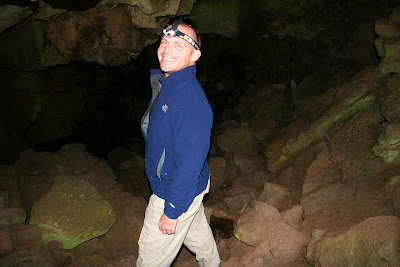 David inside the cave. He had a headlamp on his head and I
carried a flashlight. I took this (and the rest of these) with a
flash. Otherwise, it would have been completely black -- like
you can't see your hand in front of your face when the lights
were out kind of black. Absolute darkness. A little creepy but
very cool. 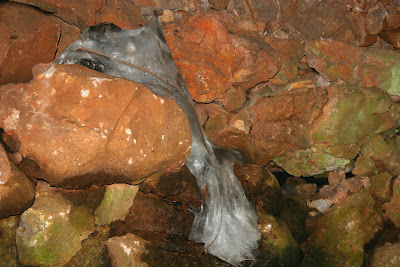 It was seriously chilly in there. See -there's ice! We were fine
in hiking boots and a jacket, but it was just surprising to see
ice in the middle of summer. No a/c needed there. 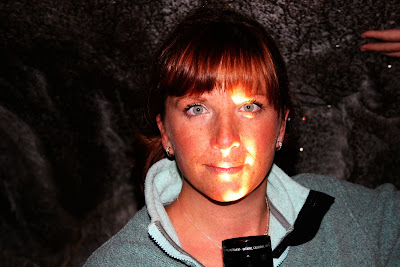 My cave version of Blair Witch. :) 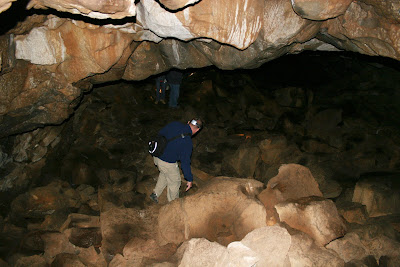 It was a little tough on the ankles at times. Made for a good
hike even though it was only a mile in and a mile out. The
ceiling would range in height from 30 feet to three feet.
(You can actually opt out of the short ceilings by taking
the other fork in the road. If you do go right toward those
low ceilings, they don't last for too long.) 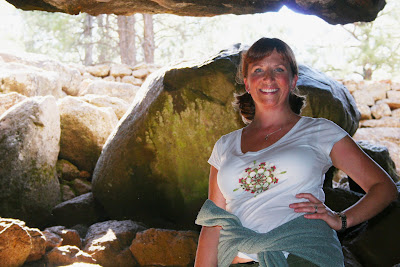 Me, at the entrance/exit. This was a good little workout!
Much enjoyed. After that, it was back on the road so we
could get home to let the kiddos outside. We wrapped up
the weekend with a movie at home (Curious Case of
Benjamin Button) and slept great. Good day!
*********************
David left this morning for the week in New Mexico. He will
be back Thursday night -- around 9pm. I'm excited for the
week!
Posted by Samara Link at Monday, June 08, 2009

Email ThisBlogThis!Share to TwitterShare to FacebookShare to Pinterest
Labels: Arizona, D and me, Link Adventures

Wow, I did not know about this place! 3 FEET? That mighta made my claustrophobia act up a little, lol!
Cute piggy tails!
And you are far too pretty to be Blair-Witch-ish!

thats soooooooo fun! I just dont think I would trust anyone to take me in a dark cave........ EVER!!! AHHH! we used to explore caves all the time when i was a child! Okay, so i just woke up and maybe my eyes arent working rignt, I know they arent but what the heck is that 3rd picture?? Is it some kind of EGG SACK??? My eyes are seriously BLURRED and I cant figure it out!!! I hope thats not an egg sack... AHHHHHHH!

Oh wow... this must have been a lot of fun! Scary at the same time though...

You are BRAVE, Sam! I would NEVER in a million years step inside a cave. I tried it once and freaked the %^*^ out!!! I am way too claustrophobic to even wear a hooded sweatshirt!!
Glad you had a nice time though and got to spend it with D :)

PS I also love the color of your hair!!

That is so freaking cool! I never knew AZ had so many fun things to explore! I love that you go to see these things then show us who might not ever get the chance.
Cool Link Adventure!

That is awesome! Kinda spooky - but awesome. Did you see any wild critters in there?

oh that looks fun and a bit scary. :)