I was a rebel with a cause.
I moved out at 17 years of age --October of my senior year --
because I just couldn't stand being a Jehovah's Witness in
a house full of crazy for a minute longer.
(Best decision of my life, by the way.)
At 12 years of age, I developed this plan. I knew
there was something seriously wrong with that
organisation and my parents. I wanted out, but I had to
wait until I could take care of myself.
In my infinite wisdom, I did a lot of rebelling.
I guess I felt like I had a lot to prove.

One such moment was my first tattoo.
Not that tattoos are bad or always a sign of rebellion.
I have a second one on my lower back that I love and
don't think of as a rebellious statement at all.
But this one was. My first one.
I wanted to do something different and cool.
I wanted to be a rock star.
I wanted everyone to know I wasn't a sweet, little
Jehovah's Witness anymore that blindly followed
all the rules of her brainwashed parents and her
cult like religion. Instead, I was my own person
with my own power to do what I wanted, when I wanted.

So one summer day, I was sitting outside with a
group of friends, including Travis, my first true
love and Jennifer Truman (then Collins), who is
still my BFF. :) I decided that would be the
day for my first tattoo. And off we went. No harm,
no foul, right?

Until, that is...
I picked a tattoo off the wall with no meaning
whatsoever that actually had an eyeball in the
center of it. No need to go back over those
words. You read it right. An eyeball. And then --
again, infinite wisdom totally in play -- I
asked that it be rather large and on my right
shoulder for the world to see for the rest of
my life.

Thanks to Jen, I have pictures that documented
the day... 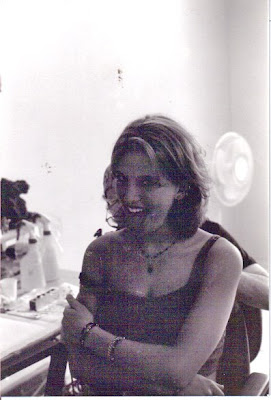 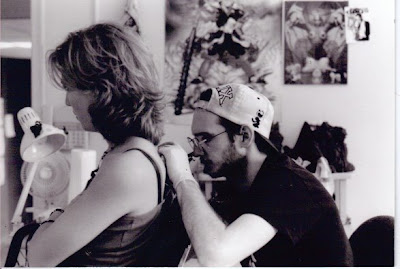 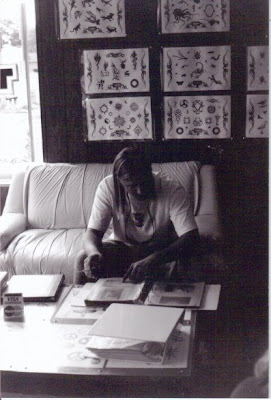 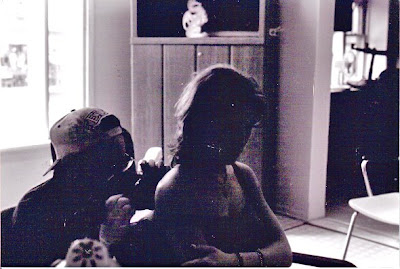 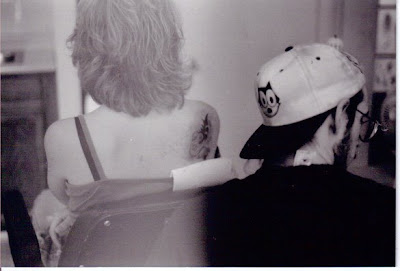 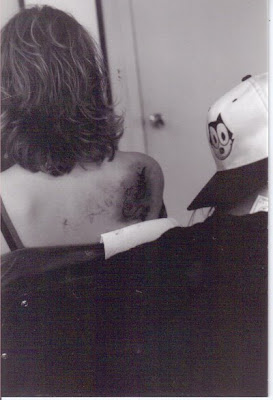 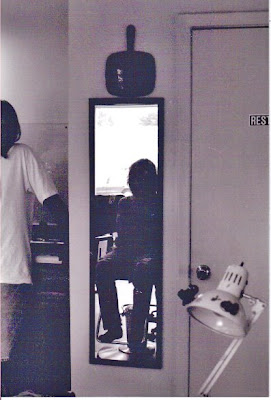 This tattoo has made a lot of people gay with hilarity over
the years. For example, anyone whose seen me naked, friends,
in-laws, passers by. And lets not forget the girls at the
makeup counter who I go see when buying tattoo cover up that
never matches my skin. I've had people do a skit of sorts
when imagining what it must be like for me to be around
someone new when I'm not clothed. "I'm lookin' at you," they
say with their shoulder. Good times.

I always thought I'd eventually get it removed, but I've
recently decided I will instead have it remade into
something more meaningful. While I would love to have
bare shoulders and feel sexy in a strapless dress, I've
figured out how to work around it when necessary, and I
don't want to go through the bother of tattoo removal.
Besides, it's part of who I am -- part of my story.
Now I just need to decide what I could change it into.
I'm thinking an earth, but then I still don't know what
I'll have them adapt the little devil tail into. (God,
that thing is horrible.) Time will tell. I'm open to
suggestions!

Thought you might enjoy this story and the pictures
worth so many words.
Posted by Samara Link at Saturday, November 08, 2008

Sam, you are such a rebel!!! An eyeball tattoo!!!!!??? LMAO!! You could change it into an earth with maybe vines encircling it so that you can cover the Devil tail???
PS I have struggled with my religion since I was 12 also and kind of "quit" being a Catholic at that time. Still struggling in that area :( You were very brave to leave your family for what you really believed (or didn't believe!)

This story is awesome! I think a lot of people can relate. I too have my first "rebellion" tattoo...except mine was homemade and looks like total crap. Yep, used a needle and Indian ink. Thought about getting it redone, but it's too part of my story. :)

seriously, i love that tattoo and i love that you laugh with me about it! I will be excited to see the eyeball and the devil tail turned into something a little less "Tool Bumper Sticker" and a little more "Samara." You're a badass for posting this!

Just wanted to say, this post brought back so many memories. It was an amazing time. I'm so glad I was there to document some of it. And I'm so glad you have the proof to share with all of us!
I love you so much Sam! We've come a long way, haven't we?!
:o)

What a cool story!!! Can't wait to see how you decide to transform this one!!!

LOL! Excellent writing!...maybe your subconscious was thinking its eye was opened to the crazy? LOL!
Anyway, thanx for the tat story, and here's lookin' at you, kid!
HA!

To Jen and Jen --
Yeah, I took quite the walk through memory lane when I posted this. It was fun to think about -- all seemed like another lifetime ago. I love you guys both so much, too!