We have loved camping at Potato Patch.
It's a campground at the top of Mingus Mountain
between Jerome and Prescott in Arizona.
Elevation 7400. Perfectly woodsy. Great bathrooms.
Lots of nature. Only two and a half hours away.
What more could you want?
So, we went back two weekends ago. We even got
the same camp site for the third time in a row. 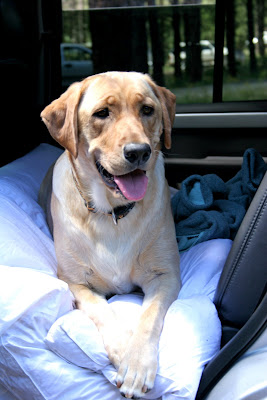 Norah was happy to lay in the backseat while we setup camp. 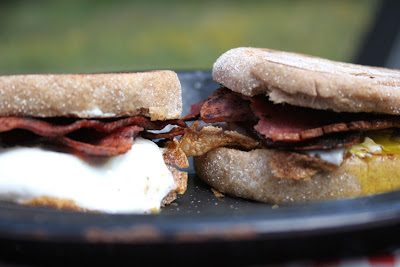 We made some good food -- he did anyway! 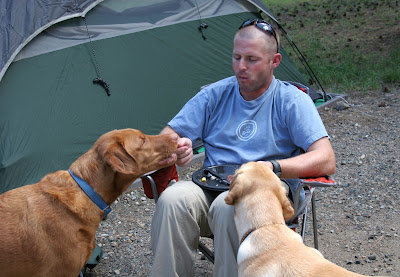 There was enough for all. Killian and Norah love when their
dad makes turkey bacon. :) 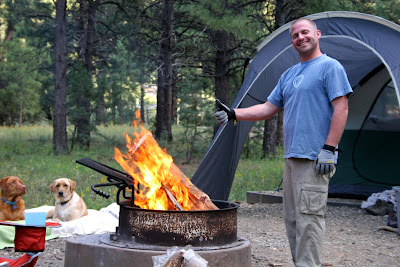 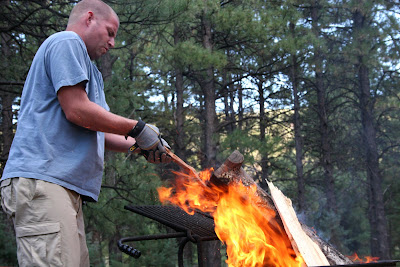 Maybe a little too good! 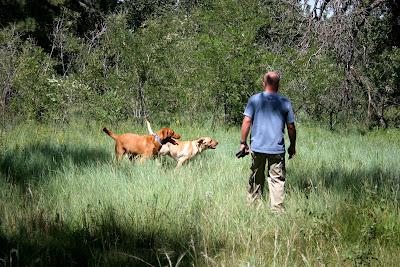 Instead of hiking up the mountain behind us like we
normally do, we went for a nice walk in the field across
the street. D spotted a family of elk in it last time we
were there. 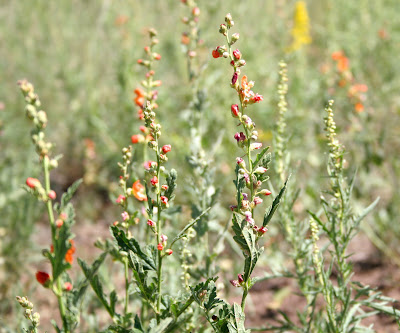 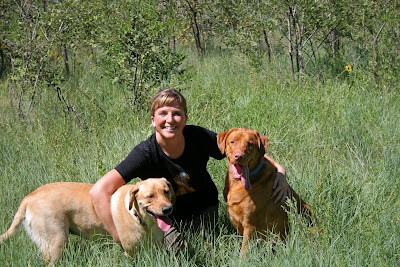 Me with my babies. 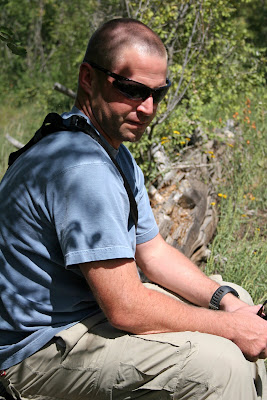 Such a peaceful place to be. (And such a
cute boy.) 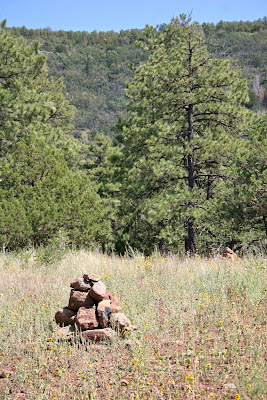 We ran into several piles of rocks just like this one.
They were all kind of in a row. I couldn't figure out
what they were for. Any ideas? 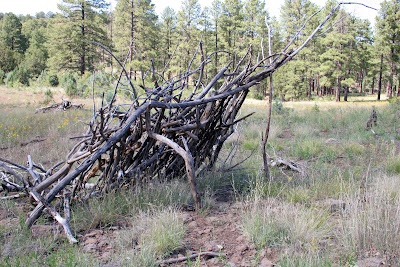 We also spotted this man-made shelter. 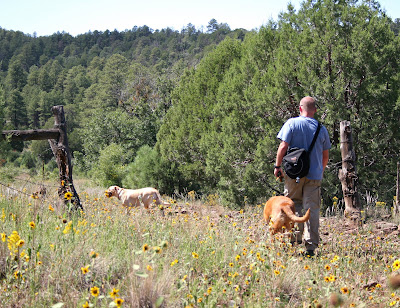 My god, does this beat concrete, pavement,
billboards, and traffic or what?! 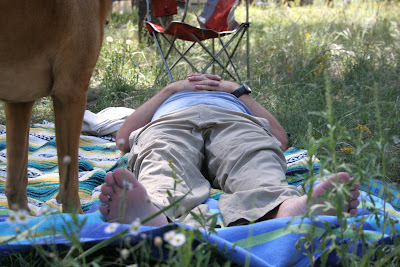 Then it was back to camp for a rest. 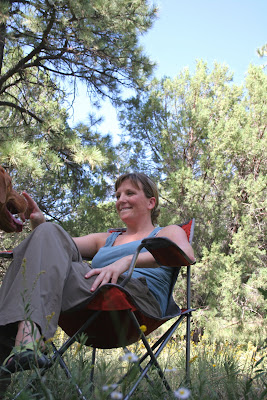 Didn't do nearly as much venturing off as normal this
go around. It was nice just to chill. Watch the fire.
Hang out. Read. An awesome afternoon. 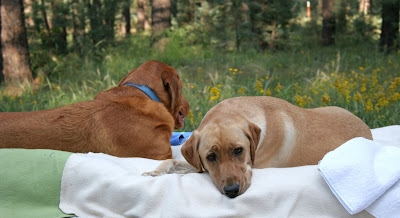 Seriously, how cute is Norah? It kills me when she does
this. She rests her chin on you or whatever surface is near,
and she looks up with her big puppy eyes. Wins me over every
damn time. 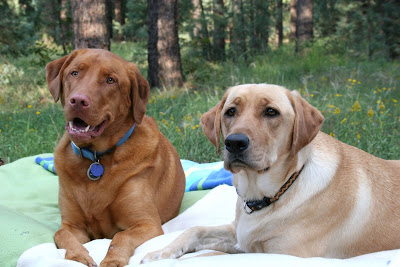 We bring a king size down mattress topper for them to
sleep on in the tent. This time, we got smart and made
a bed outside for them with it while we were sitting
by the fire. I think they approved. Spoiled babies! 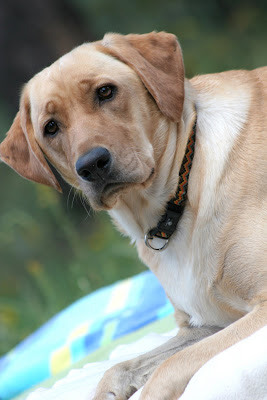 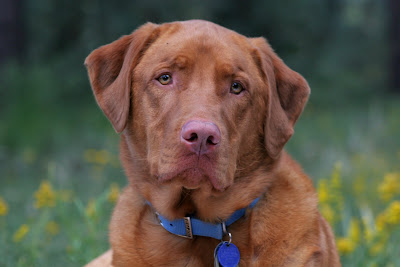 Right before we packed up to go, my husband, with an
always keen eye for spotting itty bitty creatures in
nature, found this guy: 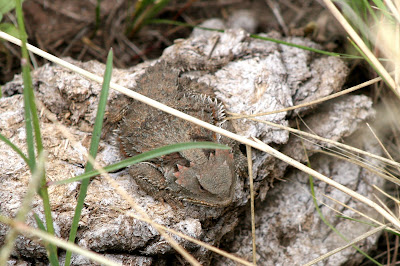 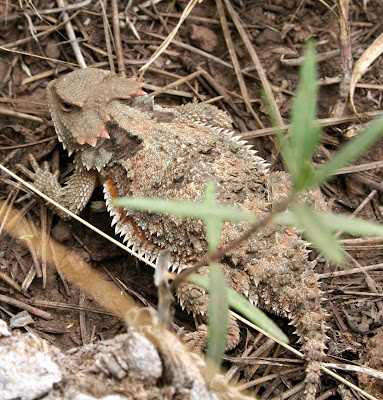 Earl, (I named him Earl), is a Greater Short-Horned Lizard.
Apparently he squirts stinky blood out of his eyes when
he feels threatened. Uh... Yuck! I would think his horns
and such would be enough of a detractor, but hey, I'm no
Earl expert.

What a great camping trip! The last time I camped in the mountains was when I lived in Arizona (10 years ago!)...

I haven't seen a horned toad in YEARS, since I was a freshman in high school. We used to have a lot of them around where we lived at the time, and the cats always had the dried blood on their fur from where they'd get squirted.

Your dogs look so at home camping... mine are prissy like me and don't like dirt or bugs! :)

Sam the pix of your pups are adorable! I really need to get my two out in nature and let them explore. They are such home bodies!

I want directions to your camp site...looks divine. Haven't camped since my 16 year old was 2 - YIKES! Think of what they are missing. thanks for making me think about doing it soon!

it all looks amazing! love your photos!! :)

love the pix you took of Linz, very cool...we had NO clue to do cool stuff like that in my day :(
looks like a great camping spot, I may have to get directions from you one of these days...as for your pile 'o rocks...sometimes they're just piled up like that as kind of a 'wink' from hikers...like "hey, we were here, look over there, we saw this cool thing", hence the arrow-ish shape...and sometimes they are from geo-cachers...
oh yeah, cute new Halloween stuff too, you could open your own boutique!

Your sandwich picture is making me hungry. Hungry enough that i may have to print it and eat it!!!! MMMMMMMM!